Video News and Media Stories The Origins, History and Centralization of US Notes and Coins 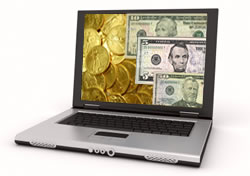 When you’re pulling out a few bills or loose change to pay for something, it just happens. There’s little if any consideration to how the US monetary system came to be or how it works. It just happens.

Numismatists will typically have a better grasp of information, but it’s easier to get caught into the history and dynamics of certain coins or banknotes and not take the time to study the origins of all US money, its centralized structure and why it was needed and created.

While numismatic related video content is scarce, there are several that are informational, engaging and entertaining. The History Channel has more than one. In particular, their free online video detailing the history and centralization of US money is worth watching.

Like virtually all History Channel presentations, if you’re even slightly curious about a certain topic, they’re superb at relaying key information in an informative and entertaining way.

While a viewer at times could wish for more in depth coverage within a certain area, their videos relay in minutes what others fail to do in hours. They also offer interesting excerpts from numismatists and current and past US Mint and Bureau of Engraving and Printing officials.

I think that Centralization is form of Monopoly. centralizing issuing currencies and coins is violation of antimonopoly act and against the free enterprise system. I think that Bernard von NotHaus and NORFED should be allowed issue their inflation proof currency and coin!

There is no such thing as an antimonopoly act so no violation could occur. Although there is the Sherman Antitrust act which was formed July 2, 1890. This act didnt outlaw the trusts or monopolies but only limited them. The act wasnt respected or followed until Theodore Roosevelt’s presicency in 1901.