California fractional gold coins are up for sale in Teletrade’s live auction this Sunday, June 22. As Teletrade aptly described the coins in a recent announcement, "these tiny enigmatic gold pieces are shrouded in historic controversy, celebrated by curiosity, and are sought-after favorites of many collectors." 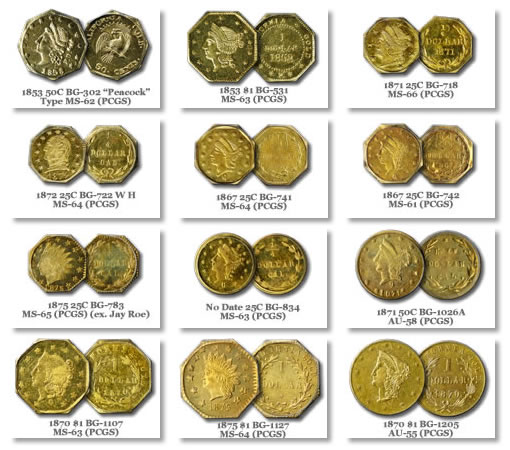 These round or octagonal "Old West" gold pieces were privately issued in denominations of quarter-dollars, half-dollars and dollars. Early coins were essential in combating small change shortages, even though they were not minted by the government. And that is just a part of their unique history.

Teletrade’s Sunday auction includes more than 1,500 lots with 80 some coins from "The Kovach Collection," which is listed as the “3rd Finest Set of All Time” on the Professional Coin Grading Service Set Registry.

California fractional gold coins are separated into three general categories based on production dates and historical event swings. Period One coins were struck 1852-1856, and Period Two 1859-1882. Several Kovach Collection highlights for sale dated during these two periods are shown above — for more information, including high resolution coin photos, click each image.

Fractional gold pieces have differing characteristics depending on the period. Period One includes coins of high gold content, hand-struck mostly by entrepreneurial California jewelers for intended circulation given that small change was scarce.

During those California Gold Rush years, the United States Mint could not manufacture money fast enough to meet demand. The situation was made worse given the long, slow and tedious process of transporting bullion from the West to Philadelphia for coining, and then back again.

By 1854, the Mint’s San Francisco Mint opened and began to address small change shortages with its production of silver coins. Soon, the need for fractional gold coins in daily circulating change was eliminated, marking the next period.

Period Two began in 1859 with fractional gold pieces generally weighing less than their face value. Emerging design varieties occurred, and with those came changes in how fractionals were used and for what. At one point, the U.S. Mint took issue with their "competition." Eventual enforcement of an older law preventing private minting of coins brought a halt to Period Two in 1882.

For a brief but good overview regarding each period, the NGC announcement for certifying California fractional gold coins may be of interest.

Bidding is open now for Teletrade’s live Sunday auction, which will be held between 3 p.m. and 10 p.m. (ET). View the Entire Collection and Auction Catalog at www.teletrade.com, Auction 2546