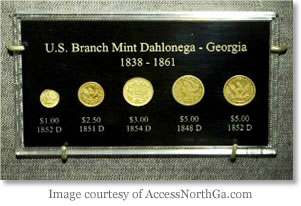 DAHLONEGA – The Lumpkin County Sheriff’s Office has thwarted a possible conspiracy to steal coins from the Dahlonega Gold Museum.

On Christmas Eve, an anonymous caller alerted the museum of the potential conspiracy.

Officials contacted one of the alleged co-conspirators, who had recently visited the museum and researched the value of the coins.

“We put them on notice that we knew about the conspiracy and none of the coins would be stolen,” Lumpkin County Sheriff Mark McClure said. And, “We would be definitely looking to charge individuals if that did occur.”

The man, who is from out of state, denied having any involvement in the plot.

McClure said residential burglaries of coins and coin collections are fairly common in the community, but to steal coins of such value as the ones in the museum is a “rarity.”

“We take these treasures of our county very seriously because they are very valuable,” McClure said. “But they’re also of great historical significance to the citizens of Lumpkin County.”

Information about the conspiracy was also given to the Numismatic Crime Information Center, a database for worldwide investigations related to coin and artifact thefts.

In January 2007 about four million dollars worth of coins, some of which were Dahlonega Mint coins, were stolen from coin dealers in Florida but there is no known link between that theft and the museum conspiracy.

*CoinNews Editor’s note. CoinNews would like to thank Ashley Cox and AccessNorthGa.com for their very generous permission to re-publish this article on CoinNews.

Keep your eyes on your coins! Always keep yours coins out of sight! Keep in safe place!

Very Interesting! I got good knowledge on value of gold coins by going through your site. You gave a fantastic note on gold coins. For thousands of years, gold coins have been used as currency in many cultures. I am really thankful to you for your information.