Omaha, NE — January 2, 2008 — Proxibid, the leading provider of Internet auction webcasting services, today announced that it will provide live online bidding for the Bowers and Merena Orlando Rarities Sales, slated for January 8, 2008 in Orlando.  The live auction event will take place at the International Plaza Resort & Spa in the heart of Orlando’s bustling entertainment district, two days prior to the Orlando F.U.N. Show.  Live online bidding will begin January 8 at 6:00 p.m. EST on Proxibid.  View the auction catalog now!

670 lots of high-quality, rare U.S. coins will be available for live online bidding during this auction.  Even the most discerning collectors will agree that this is a must-attend event.  With online bidding via Proxibid, collectors world-wide can log on to bid and win some of these rare coins.

One of the most exciting coins to cross the block during this auction is Lot 516, a 1795 Capped Bust Half Eagle, Small Eagle, BD-2, HBCC-3034, Miller-3, Rarity-6, graded MS-64 by NGC.  According to Bowers and Merena’s President Steve Deeds, 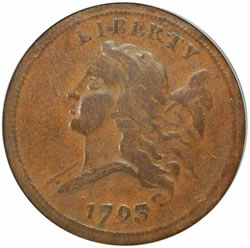 “This is a spectacular specimen.  Only 20 to 30 examples of the 1795 BD-2 Half Eagle are believed to have survived, and the near-Gem that we are offering here is undoubtedlythe finest example available for private ownership, if it is not the finest known.”

“We are thrilled to offer online bidding via Proxibid for this auction,” said Deeds.  “We have several high-profile items available for this auction, including a 1793 Half Cent, the United States’ first half-cent coin.  Collectors won’t want to miss this auction!”

•    Lot 179:  1927-S Standing Liberty Quarter. MS-65 FH (PCGS) — One of the undisputed key-date issues in the 20th century U.S. silver coinage series, the 1927-S Standing Liberty Quarter has a tantalizingly low mintage of 396,000 pieces.  With so few coins produced, coupled with the pressing needs of commerce in the years leading up to the Stock Market Crash of 1929, the 1927-S has an understandably limited population of Mint State survivors.  Even poorly struck examples in MS-62 and MS-63 represent significant bidding opportunities in today’s market.  Coins with Full Head striking detail are very rare, and J.H. Cline (Standing Liberty Quarters, Fourth Edition, 2007) states that only 1% of the original mintage emerged from the dies with sufficiently sharp detail.

When offered at all, Mint State 1927-S Quarters with Full Head definition typically grade no finer than MS-64.  It is even more impressive, therefore, that the coin in this lot is not only exceptionally well produced by the standards of the issue, but that it has been preserved with enough care to qualify as a Gem.  This cataloger cannot recall ever handling a ’27-S with more complete definition to Liberty’s head.  The balance of the features is also impressively bold, if not downright sharp in detail.  The surfaces shimmer with full, softly frosted luster that is readily appreciable in the absence of distracting abrasions.  Otherwise brilliant, an overlay of delicate golden iridescence is noted for the obverse. A definite highlight of the silver offerings in this sale, this exquisite 1927-S Quarter belongs in a collection of Registry Set quality.  PCGS# 5765. PCGS Population: only 3; and just two are finer in MS-66 Full Head.

•    Lot 357:  1892-S Morgan Silver Dollar. MS-64 (PCGS) — When offered in Mint State, the 1892-S is apt to be highly attractive with a sharp strike and excellent luster.  Unfortunately for today’s collectors, such coins are not offered with any degree of regularity in the market.  Indeed, the 1892-S is a prime condition rarity in the Morgan Dollar series.  Very, very few Mint State coins have survived, a fact that is the result of heavy domestic circulation and probably also wholesale destruction of undistributed examples under the terms of the 1918 Pittman Act. Even a heavily abraded coin in MS-60, MS-61 or MS-62 represents a fleeting buying opportunity, while Choice and Gem-quality coins are of the utmost rarity and desirability.

It has been quite some time since this writer has been given the chance of cataloging such a beautiful 1892-S Morgan Dollar.  There are very few abrasions, and those that are present are small in size, singularly inconspicuous and well within the context of the assigned grade.  We note a touch of light gray discoloration above the O in OF on the reverse, mentioned here for accuracy. Both sides are expectably sharp in strike with bright, semi-prooflike luster to the surfaces.  Essentially brilliant, and destined for inclusion in an advanced Morgan Dollar collection.  PCGS# 7218. PCGS Population: 9; 13 finer.

•    Lot 383:  1901 Morgan Silver Dollar. MS-65 (NGC) — The leading condition rarity in the P-mint Morgan Dollar series, the 1901 represents an important find even in the lowest Mint State grades.  Gems are exceedingly rare, and not only because few examples were prevented from entering circulation beginning in the year of issue.  The Philadelphia Mint did a very poor job producing this issue, and the vast majority of coins emerged from the presses with light striking detail in the centers and inferior luster.  PCGS and NGC have seen only six examples that are vibrant and sharp enough, as well as possessed of sufficiently smooth surfaces, to warrant an MS-65 grade.  The 1901 Morgan Dollar is unknown any finer.

As one of the finest, most visually appealing examples of this conditionally challenging issue available in today’s market, this NGC MS-65 would serve as a centerpiece in any collection.  This is a well-struck piece with essentially abrasion-free surfaces.  It is unusual to see luster this brilliant on a 1901, which is typically never encountered with blazing luster as you would expect to see in, say, an early-date Morgan Dollar from the Carson City or San Francisco Mints.  In fact, this coin is about as vibrant in the luster category as one could realistically demand for the issue.  Tied for finest known, this Gem is a definite highlight of our Morgan Dollar offerings in this sale.  PCGS# 7272.  Combined PCGS and NGC Population: just 6; and none are finer.

“The caliber of coins available in this auction cannot be found elsewhere,” said Ken Maxwell, vice president of Proxibid.  “Online bidding for this auction is critical for collectors who cannot make it to the live event.”

Pre-bidding for this auction is already available online at www.proxibid.com/bowersandmerena.  Log on now to bid and win.

About Proxibid
Proxibid is the premier provider of live Internet Webcasting services.  With Proxibid, bidders have access to real auctions, with real auctioneers, from the comfort of their home or office.  Bidders can view auction catalogs, post pre-bids and participate in real-time Internet bidding via Proxibid’s powerful auction portal.  As a leading pioneer of live Internet bidding technology, Proxibid continues to lead the marketplace by offering an unparalleled level of customer service and support.