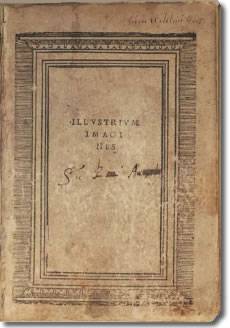 Manley purchased it for $8,050 in the November 1, 2007, rare book auction conducted by George Frederick Kolbe of Crestline, California. In the catalog, Kolbe described the book as “… of unparalleled importance, being only the second numismatic book ever published, and the first printed book substantially illustrating coins and medals … A handsome publication, truly one of the greatest landmarks in the history of numismatic literature.”

“This generous gift is unquestionably one of the most treasured volumes in any numismatic library collection,” said ANA Acting Executive Director Ken Hallenbeck. “This becomes the oldest numismatic book in the world’s largest numismatic lending library. It is a terrific addition to the ANA’s Dwight N. Manley Library.”

In 2003, the ANA Library was named in honor of Manley when he gratefully donated $250,000 to the Association as way of saying “thank you” for the $400 scholarship he received as a teenager in 1980 to attend an ANA Summer Seminar session. 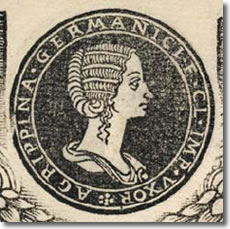 “The entire hobby continues to benefit from Dwight’s magnanimous generosity. His extraordinary donation of an original edition of the world’s very first illustrated coin book now becomes one of the distinctive works in the library named after him. The ANA is grateful for his years of loyal support,” said ANA President Barry Stuppler

“This book needs to be available to scholars. There are fine reproductions that have been produced in recent years, and one already is in the ANA Library, but there is no substitute for viewing and studying the real thing. When I saw an original edition was available, I immediately thought about buying it and donating it to the ANA,” Manley said.

“The book represents the beginnings of the science of numismatics,” said Douglas Mudd, curator of the Edward C. Rochette Money Museum. “Andrea Fulvio took the first steps towards making numismatic information available to scholars and collectors by linking information about ancient coins and medals to illustrations of the pieces. This connection to the ancient world of Greece and Rome was a key component of the Renaissance. In the process Fulvio also managed to create a new collecting area — that of numismatic literature!” 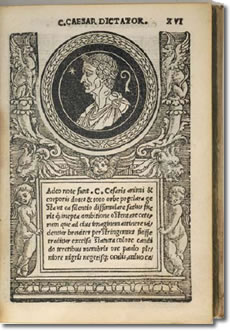 Illustrium Imagines was written by Fulvio and the illustrations are attributed to Ugo da Carpi of Venice, Italy, an acquaintance of preeminent Renaissance artist Michelangelo. The 204 white-on-black woodcuts show medallion-like portraits of Roman rulers within elaborately drawn borders. The 120 leaves of the book were rebound apparently in the 1700s with a spine lettered in gilt.

“The suburb, expressive woodcut portraits were based on the ancient Roman coins and medals in the collection of Jacopo Mazzocchi, the book’s printer,” Kolbe explained.

The book will be displayed in a special ANA Library exhibit during Summer Seminar 2008, June 21 – July 4.

For high-resolution images, contact RyAnne Scott at 719-482-9821 or scott@money.org. The American Numismatic Association is a nonprofit organization dedicated to educating and encouraging people to study and collect money and related items. The ANA helps its 32,000 members and the public discover and explore the world of money through its vast array of programs including its education and outreach programs, museum, library, publications, conventions and seminars. For more information, call 719-632-2646 or visit www.money.org.

Image 5: The 120 leaves of the historic 1517 book, Illustrium Imagines, were rebound apparently in the 1700s with a spine lettered in gilt. Collector Dwight Manley has donated an original edition of the rare book to the ANA Library. (Photo credit: American Numismatic Association/Douglas A. Mudd.)