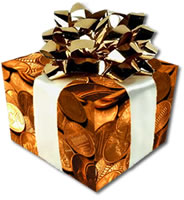 These pennies don’t make their way into piggy banks or Lincoln coin collections.

Instead, the children put their pennies together and they’re literally trucked to the Penny Harvest Field, an enormous and specially designed penny-holding structure in Rockefeller Center.

It’s here where the children can see the massiveness of their collection and can better grasp how their combined efforts and hard work will pay off for charities they’ll later select.

According to Common Cents, the creators of the Penny Harvest:

Within all those facts are stories of how the program changes lives. And perhaps just as important, the values learned by the children participating.

The Penny Harvest Field is at the Rockefeller Center between 50th and 51st Streets. It opens to the public today, Dec. 10, and lasts through Dec. 31. The hours are from 9am to 9pm.

For a local perspective of the event, watch the WNBC (New York NBC) Channel 4 video of this year’s efforts from one school.

How would charities be affected with the elimination of the penny?

In the recent CoinNews poll, Eliminate the U.S. Penny?, 45% of respondents indicated that the penny is no longer needed. Here are some interesting supporting points for those opinions:

However, it’s harder to quantify some of the intangibles the penny brings. For example, would charitable programs and the spirit and lessons of giving, like those found with the Penny Harvest Field, suffer without the penny. Would a nickel be given as freely?

2007 Update: How many pennies were collected? Check the Penny Harvest Field Photos

The final tally for pennies within the Penny Harvest Field is approximately 100 million. That makes the penny pathway not only a glittering site to behold, but one valued at $1 million.

A scope of the size and true uniqueness of this charitable event can be seen through this Associated Press photo.

For outstanding photos taken by the public, while they’re available, click here.

*Editor’s note: This section was updated the day after the event started, Tuesday, Dec. 11.