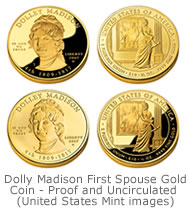 The Washington, Adams and Jefferson gold spousal coins were ignited with buying pressure and sold out blazingly fast.

Minutes ago, the Dolley Madison First Spouse Gold coins went on sale by the U.S. Mint. Will they experience the same heat as their sister coins and sell out in hours?

The Madison presidential spouse coins are the forth in the new series and the final ones for release this year.

The Dolley Madison First Spouse coins have an interesting interior reverse design. They feature an image of her saving the Cabinet papers and the renowned Gilbert Stuart portrait of George Washington, as she was forced to flee the White House in advance of approaching British troops in August 1814.

The front of the coins have a portrait of Dolley Madison. Other details are similar to the previous spousal coins, as well as their composition, which is .9999-fine, 24-karat gold.

Like the previous First Spouse Gold coins, both Proof and Uncirculated collector versions are available with a limit of 20,000 for each. That limit is extended further by restricting sales to one of each per household

The more recent volatility and increased gold prices has resulted in higher price points for the newest coins as well. The proof version is $529.95 while the uncirculated coin is priced at $509.95. That represents an increase over past versions of $100 and $99 respectively.

The product, information and order pages on the U.S. Mint website are:

Will the Madison First Spouse coins sell out?

The first coins in a new series tend to be the most popular. After the success of the Martha Washington and Abigail Adams Spouse versions, it wasn’t hard to predict that the Jefferson First Spouse coins would sell out.

However, unlike non gold collector coins, an intent to collect the entire series of spousal coins represents a decent investment and tie-up of dollars. Even more now with the higher prices. That may weigh heavily in the success of future spouse coins.

And interestingly, while the initial spouse coins commanded a huge premium in the secondary market, you’ll find places such as eBay with the coins now listed for sale at comparatively lower prices. That in itself represents at least some cooling.

In the end, given their limited mintage numbers, their attractive interior reverse design and the youth of this coin series, they’ll very likely sell out. However, collectors may have more time to purchase them – they may not sell as quickly.

[…] forth coin in this series, the Dolley Madison First Spouse Gold coin, went on sale today at 12 noon […]