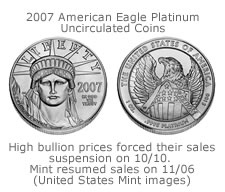 With the surging movement of bullion, the Mint has implemented cycles of coin suspensions in order to reintroduced coins at higher prices.

Unfortunately, the suspensions to date haven’t been a one or two day event but instead lasted weeks. Fortunately, the wait for the resumption of American Eagle Platinum Uncirculated coins is now over.

Yesterday, November 6, the platinum coins returned with their new prices.

The following chart shows the old and adjusted platinum coin prices along with their increases:

The percent increases are actually less than the Mint’s first round of gold suspension and price adjustments. Of course, those latter coin prices couldn’t hold when gold hit a new 28-year high, forcing the Mint to suspend gold coin sales again on Monday, November 5.

Will the platinum coins go through the same cycle if the bullion market keeps its upward swing? Let’s compare more…

When the U.S. Mint suspended uncirculated platinum coins, an ounce of platinum was hovering around $1,389. Yesterday, platinum closed at $1,472. That’s an increase of 5.98%.

Given the Mint’s new price increases ranging from 7.5% to 9.5% and comparing platinum’s increase, it would appear the Mint is well position to sustain sales for some time.

Although this year platinum has experience a solid upturn and many experts are talking about its continuation north.

As in many things, only time will tell.