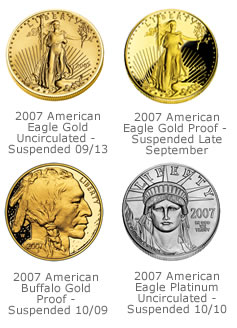 The bullion coins join the ranks of the American Eagle Gold Uncirculated coins that were removed for sale back on September 13.

The proof versions of the gold American Eagles were suspended a few weeks later.

US Mint’s reasoning for suspending gold and platinum coin sales

The reason? The same. The United States Mint sights increased precious metal prices – in this case gold and silver – as the catalyst for suspending sales.

The following statement was posted on the U.S. Mint website in bold, red letters:

Due to the increasing market value of gold, the American Buffalo Gold Proof One Ounce Coin is temporarily unavailable while pricing for this option can be adjusted; therefore, no orders can be taken at this time.

The platinum American Eagle statements were the same.

At the time of their first suspension, an ounce of gold hit a high of $711.75. The price per ounce has now shifted slightly past $750 while Platinum is hovering around $1,389 per ounce.

Prior to the freeze, the price for the one-ounce proof Buffalo gold coin was $825.95. Here are the breakouts for the American Eagle Platinum coins and where they stood at the time of the suspension:

When sales resume, it’ll be interesting to see whether the Mint adjusts coin prices daily based on current bullion values. Or, simply sets static prices that could result in further suspensions with precious metal fluctuations.

If you’ve missed the prior CoinNews.net articles regarding gold values and coin suspensions, you can still read them now at: