Coin & Numismatic News Lincoln Pennies Should Be Melted; Forget the 5 Years in Jail 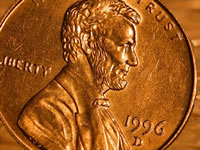 So says Democrat Congressman Zack Space of Ohio who’s trying to help a company within his district. The company, Jackson Metals, would melt pennies for their copper content.

Helping businesses is hard to fault. But is newly proposed legislation that would benefit companies like Jackson Metals and change coinage laws the right thing to do? What would Jackson Metals, Rep. Space, the government and taxpayers really get from it?

The ban on melting 1-cent and 5-cent coins

The U.S. Treasury implemented a ban on melting 1-cent and 5-cent coins that went into effect in April of 2007.

Why the ban? It’s no longer "cheap" to make small change. With the higher copper prices, the estimated cost for producing a single penny hovers around 1.7 cents.

According to a statement at the time by United States Mint Director Edmund Moy,

“The new rule safeguards the integrity of U.S. coinage and protects taxpayers from bearing the costs to replace coins withdrawn from circulation.”

Violating the ban gets more than a small slap in the face. It can lead up to a $10,000 fine and 5 years in prison.

New legislation, H.R. 3956, attempts to straighten everything out

Throw in H.R. 3956, a newly introduced bill by Mr. Space. First, it contains the language of an older bill, H.R. 3330, which would give the U.S. Treasury the authority to change the metal composition of coinage.

That’s something the Treasury and U.S. Mint wants. Without having to go through congress, the Mint could use different metals to produce penny and nickel coins that once again made money. Taxpayers would save as well.

The second part of the bill adds provisions that would help those who would melt coins. A section states:

"…The Secretary of the Treasury shall have no authority to prescribe any regulations under section 5111(d) of title 31, United States Code, that would limit or prohibit the export, melting, or treatment of the 1-cent coin… "

If coins are removed from circulation that would have to replaced, it’s difficult to see any positive merits to this part of the bill. That is, outside the direct beneficiaries of it.

And here’s the kicker… How can anyone mentally picture a person getting sent to prison for 5 years one day and then the very next day make money… It doesn’t sit right.

Either the government was outrageously absurd in the regulatory ban and need for it, or there’s true merit for it and midnight legislating should slow down.

The good news? A slow down is indeed in the works. Hearings on the bill have been scheduled for this week.

For whatever it’s worth, is the bill living up to its name, Coin Modernization and Taxpayer Savings Act of 2007?

Perhaps that’s the largest point of amusement in all this.

Secondly, had the cost for taxpayers truly been respected, coin composition changes could have been recommended or at least planned long before now. It has been, after all, more than a year since the government’s known they’ve been losing money with the penny and nickel.

[…] had its own article on the topic and, like other news organizations, coin collectors and bloggers, everyone was interestingly […]

[…] ban on melting pennies and its copper and the new legislation to remove it is one thing. That should sort itself […]

[…] the U.S. is considering metal composition changes to reduce the penny cost and is ramping up a Lincoln commemorative coin program starting in 2009, […]

Eliminate the U.S. Penny? - Other Stories from Around the World Regarding Small Change

[…] with no clear direction for its smallest coin. Some say there are too many pennies and want to melt them for their copper value while others want to protect them. Some want to eliminate the penny […]

Why would anybody want to go into business melting down pennies for their copper? Most of the pennies in circulation today were minted after 1983, when their composition was changed from 95% copper, 5% zinc to the current 97.5% zinc, 2.5% copper. Since each coin weighs only 2.5 grams, that means today’s pennies are merely copper-plated zinc with 0.0625 grams of copper per coin. That means you would need approximately 7257 pennies (yes, $72.57 worth) to get 1 pound of copper. You still have to melt them down and separate the copper from the zinc. And zinc is currently selling… Read more »

Given that the US Government is barred from creating ANY currency which is not made of gold or silver, none of the currency, nor rules about what you can do with it are legal. Still, I don’t think that melting 1 & 5 cent pieces, even older ones, is worthwhile. Older coins will usually have value to collectors. Probably, the rule is yet another silly rule passed to direct attention away from something else which they are doing. Manufacturing them out of plastic is a good switch, as would doing so for paper bills. They last longer and have essentially… Read more »

“And here’s the kicker… How can anyone mentally picture a person getting sent to prison for 5 years one day and then the very next day make money… It doesn’t sit right.”

You’ve got ME confused. “…then the very next day make money…”

Where and how do they ‘make money’ the very next day?

“And here’s the kicker…” That kind of confused me too. I suspect that thought didn’t fully make it into print. As for the currency issue, the US Constitution (which is the basis for all federal law, or is supposed to be at least) says in article 1 section 8 that Congress can coin money and regulate its value, but it doesn’t state what materials may be used. However, it specifically says “coin”, and doesn’t allow for printing paper money, and that was by design (see http://www.usconstitution.net/constfaq_a8.html#Q154). Original paper money could be redeemed for coin. It seems that the Supremes decided… Read more »

I collect pennies because I love US coins. I don’t melt them down, however, if I own a pemmy, I can do whatever I want with it. No one can tell me what I can and cannot do with my coins or cash. Period.

regardless of weather you are going to melt them or not the penny is worth more than double its value in copper….to learn more about how you would sort the zincs from the coppers and why and who is doing this now visit my website.

No offense, but you clearly have no idea what you are talking about.

It takes “about” 150 pre- 1982 pennies to get a pound of copper.
Probably a little less after you extract the zinc.

Im sure your number is based on post -1982 pennies with only copper coating of .08%..yeah you would be an idiot to try to make money that way.

…a statement at the time by United States Mint Director Edmund Moy “The new rule safeguards the integrity of U.S. coinage and protects taxpayers from bearing the costs to replace coins WITHDRAWN from circulation” Millions of pre-82 cents are being withdrawn (hoarded) every month and stockpiled in buckets by copper kooks like me. These coins will never see circulation again, except as sold in $100 face lots or ton units to other speculators. So, what is the difference between melting outright today and hoarding to melt at some future date? The coins are still effectively “withdrawn” from normal commerce. Is… Read more »

Yup, perhaps when zinc is worth a cent, here we go again (production costs 1.4)
, you would be better off working an extra hour a min, but better than silver in which you spend hours or days and end up with 1 or 2 coins out of a thousand.

While where at it withdraw the penny, and its cost to business, we rid half cent.