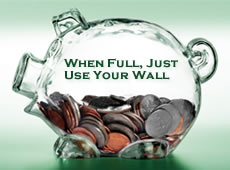 Packing coins into house walls apparently was an "in" thing during times of old.

Earlier this month there was the account of ancient roman coins found within a blacksmith’s wall in Portugal. Now, there’s another case of rare coins found in an old home and wall in Pennsylvania.

This latest batch of coins are not as old. But, ranging from the 1820’s to 1960’s, they’re not exactly youthful either.

The Tribune-Democrat reports how an old abandoned home was searched, at the behest of the family members who owned it, by Jeff Bidelman. Bidelman is the owner of Rare Collectibles in Johnstown, PA.

Upon inspection, Bidelman had already collected a bag of coins when he noticed a hole in the wall. Talking with the late home owner’s daughter, she recalled intriguing youthful rumors.

The hole in the wall turned out to be a nice family vault of coins!

You can find the entire article from the Tribune-Democrat here.