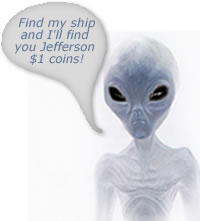 Are the new Jefferson Presidential $1 Coins really released into circulation? Have you seen any? Or was the United States Mint ceremony announcing their release just marketing hoopla and a government cover story?

Well, there’s no question the U.S. Mint’s ceremony the other day had its fair share of marketing, but there’s nothing wrong with that. And I expect it’s not their fault that trying to get freshly minted Jefferson dollars seems as impossible as tracking down a flying saucer around Area 51!

Getting the new $1 coin rolls from a bank in my city wasn’t easy. In fact, I couldn’t! I spent Saturday trying to track down some of the Jefferson $1 coin rolls and, wow, what a pain and what an experience.

Because it was Saturday and days after the official release, I was afraid that I had waited too long and it would be hard to find the new $1 coin rolls. So I made some calls first.

It was only 11:30 AM when I called my nearest bank, one of those big, major institutions with branches all over the city. I had to call back twice! No one at the branch would pick up the phone and answer. Nice service…

To add to my frustration, each time I called I got to enjoy one of those long and dreadful automated voice menus. Finally, when I actually made it through to a live person I was told they didn’t have any presidential rolls. Great.

So I called another one of their branches. Guess what? No answer again. I was determined and curious… I really want these coins and I don’t want to pay extra through the mint! I called again, and again, and again – four different times, if you can believe that. I’m not that patient. I didn’t try a fifth time.

Instead, I called a third branch of this bank. Good news! I got through. Well, I did call more than once, like both of the other branches… In talking with an associate, she said they had some $1 presidential rolls. Hurray!

But hold your horses… The teller who had them was off work and wouldn’t be in until Monday. Obviously, they’re set up for high volume demand for these new presidential coins. NOT! I was disappointed, but at least she gave me hope that maybe another branch would also have the presidential coin rolls, so I kept calling.

I called a fourth branch further away. It would be worth the long drive for me if they had the coins. No surprise, an associate did not answer. I tried twice. Okay, why bank with big guys? You’d think they could at least answer the phone when their lobbies are open. I gave up on that bank altogether. Patience is patience but come on…

I called a completely different bank. They always advertise how friendly they are and they’ve won some local customer service awards. To my surprise, a man answered the phone right away. This bank had it together because he immediately said they had presidential coin rolls, and transferred me to a woman who said to come in and get them. Wish I would’ve called them first!

When I got to the bank, I walked inside and asked about the Presidential $1 coin rolls. I talked to a teller. She was curious about my interest in the rolls and I told her I like to collect the new $1 coins. As she was counting out the rolls and putting them on the countertop, she asked if I had an account there. I said, "No, why?" She said they’re only supposed to give out one roll unless you have an account with the bank. A spark of worry set upon me… Thankfully, she didn’t mind giving me more. She gave me some John Adams and some George Washington rolls. But no Jefferson rolls!

They didn’t have any yet. They’re only going to get them at the end of the month. Well bummer… Yet, I found a new bank that really IS friendly and I’m going to move to them.

So my search is not complete. I’ll get some Jefferson rolls from some bank but I’m not going to like the wait. The United States Mint made 204 million of the $1 Jefferson coins, so I should be able to find them somewhere in the city!

That’s a shame. I feel for you and others who have to go through this. I’ve never been told by my bank that they don’t have any of the coins or there’s a limit. Although I’ve never picked up more than two rolls at a time. It’s really fun spending these too!

Are coins really a good investment and what is their average return?