Commentary What is the Best Coin Gift and How Do You Get Started? 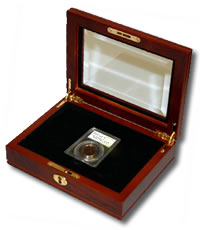 Giving coins for gifts on birthdays, graduations, Christmas and other special events has exploded in recent years. The 50 State Quarters© Program started back in 1999 helped nudge up coin collecting and coin gift giving. The new Presidential $1 Coins program started this year will likely continue the momentum.

Many coin dealers and their websites showcase "Gift Idea" products. With all the choices out there, what makes a good coin gift? When should you start? Can coin gifts start someone down the path to coin collecting? How much should you spend? Let’s tackle these questions and more!

I’ve heard and read about parents and grandparents who actually build coin collection sets with the sole intent of later giving them to their children or grandchildren. Aside from the real joy of such a gift, coin collections have the potential to improve in value over time. They could be considered investments. An investment where the child, because of their emotional attachment to the gifted coins, is less likely to frivolously sell them.

Some people build coin collections for a child intending them to become family heirlooms. While still others love coin collecting so much that they hope by giving a complete collection to a child that’ll it’ll encourage them to collect coins as well.

If you’re building or have built a collection for someone else, it’s a commendable undertaking. You’re going to pass on some special history that’ll likely be well received and highly appreciated for years to come. If you’re thinking about starting such a coin collection, here are a few things to consider:

Coins given during holidays or other special events make excellent gifts and that’s why most people choose single coins as frequent gifts instead of taking the time to build an entire collection and giving it to that special someone. Usually these gifts are for those who are still young and many times, if continued as kind of a traditional and yearly gift, they can help that special person build an interest in coin collecting.

Even if they don’t choose coin collecting as a hobby, a coin gift can be particularly unique and often appreciated above other gifts. Minimally, they’re going to last. They won’t "break", get outgrown or simply discarded, like most toys will eventually (if not in hours…). Coins are also more likely to retain their value and many times actually increase in value over the years.

When giving one or two coins as gifts, here are some things to think about:

There is a huge choice in types of coins that can make great gifts. Here are a few things to consider:

Using Gifts to Build a Child’s Desire to Collect Coins

Part of developing a child’s desire to collect coins is spending time talking about and showing them coins. Better yet, letting them help you sort through change, catalogs and bank rolls to find certain coins of interest – building collections with you. Then there’s the gifting front where they receive a coin by surprise and it makes it even more special. Here are a few thoughts about that:

These are not hard rules to follow but thoughts to perhaps ponder when considering coins for gifts. If you’re ever wondering what to give someone, think about a coin gift!