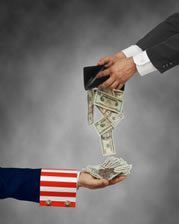 During just the first half of this year, nearly 5.4 billion pennies and almost 880 million nickels were minted. That’s a lot of change. But did you know it actually costs more to make a penny or nickel than what they’re worth?

Craziness right? Well, unfortunately, it’s the truth. Since the fourth quarter of last year, steep metal prices pushed the cost of manufacturing the penny and nickel above their face value.

The biggest culprit is the price of copper, zinc and nickel. According to United States Mint specifications, 5-cent nickels contain 75% copper and 25% nickel while 1-cent pennies contain 2.5% copper with the remaining zinc. The price of these metals have each gone up significantly since early last year.

And what’s the result? The manufacturing cost of the penny has fluctuated between ~1.5-1.7 cents and the nickel between ~8-10 cents. We’re losing money! And suddenly, thoughts of melting pennies and nickels for their metallic value start to wonder into one’s mind…

Now, this isn’t "new" news. In fact, the metal prices and production costs of these two coins forced the U.S mint to implement a no melt regulation earlier this year. Violators can face up to a $10,000 fine, or five year imprisonment, or both. At the time, United States Mint Director Edmund C. Moy said:

"The new rule safeguards the integrity of U.S. coinage and protects taxpayers from bearing the costs to replace coins withdrawn from circulation."

The metal costs most dramatically affect the penny and nickel. Although other countries have eliminated their penny equivalents and many suggest the same for here, that’s not going to happen any time soon. Even so, it would still leave a problem for the nickel. But further, it goes beyond just these two coins. The "profit margins" of other coins have suffered as well. Do taxpayers just have to grin and bear the extra costs? Maybe not…

Enter into the equation two very new bills, Senate [S.1986] and House [H.R.3330.IH]. These measures authorize the Secretary of the Treasury to set the weights and the compositions of circulating coins, thereby, providing an avenue for the mint to find solutions to fix this nightmare. Given the positive movement so far, it may just happen.

Last year over 15.5 billion circulating coins were produced. Should Congress come to a resolution and pass a new law enabling our coinage to change in composition and weight, while not causing problems in other areas – for example, forced vending machine changes – it could potentially save taxpayers hundreds of millions a year. Granted, that’s not going to help balance the budget. But it’s better than throwing money away!

In regards to the last paragraph, how many vending machines do you actually NEED to use a penny anymore? Items in vending machines are USUALLY $.50 or higher. Sure you can pay in 50+ pennies or 10 nickels, but that shouldn’t be necessary. That’s when the quarter or dollar coin should come into play. No need to remake the lesser valued coins when we have the dollar coin. You carry less coins in your pocket.

If the law happens, it sounds like they could change the composition within all coins and not just the nickel or penny. They’d probably save even more money by coming up with different and cheaper metal compositions for the larger coins. In that case, quarters would be affected and they’d really have to make sure it didn’t affect current vending machines.

Lincoln Pennies Should Be Melted - Forget the 5 Years in Jail

I wish Americans, and our politicians, would already recogize the insanity of our current currency system, and institute changes that have been overdue for decades. Why is it, with the dollar worth 1/20 of its 1930’s value, that we still use the EXACT same system of coins and currency in place seventy-five years ago? This is simply ridiculous and unwieldy, as many of my foreign customers take note of and mention all the time. The cent and the “nickel”: kill them! The one dollar and five dollar bill: koll them too. We need a 10, 20, and 50 cent coin,… Read more »

i have a 1980 something penney with a circular imprint on the lincoln side of the penney. it is about 1/16 of an inch from the edge of the coin. does anybody know it’s worth or have any info on the error?

I believe I read this evening that the U S Mint has produced 880 million Pennies and Nickles this year. I have been to the Banks in Charlotte,NC for the years 2007 and 2008 and still cannot find any rolls. Either the Mint is Hoarding these coins for a future melt down or running up the cost. I hope they do not change the metal content on the penny’s and still release 4 viariant next year for the 100 anniversary of the Lincoln cent. I also hope the Mint sell’s bags of these coins to the public off of the… Read more »