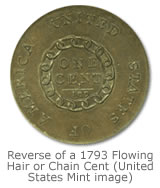 Some hard work and a huge amount of luck goes a long way – a very long way for a Burnham, Pennsylvania woman.

Cheryl Corbin was working in her garden when she came upon a rare 1793 Chain Cent. These larger copper coins weren’t made for long and had a limited population of only 36,103. To give you some perspective, during just the first half of this year over 4.7 billion pennies were produced by the U.S. Mint.

But of course, times were different back then. 1793… that’s long ago! Do you need a historical memory spark? That’s the year Marie Antoinette was beheaded and Eli Whitney applied for his cotton gin patent. Yes, things were much different!

Chain Cents are also known as “Flowing Hair” because of the portrait of Lady Liberty’s free-flowing hair on the front of the coin. That front design wasn’t very popular back then and didn’t last the year. The coin was soon changed to showcase a portrait of Lady Liberty with finer facial features and milder hair. Yet, it was the chain design on the coin’s back that was revamped even sooner. Chains weren’t, obviously, a positive message so they were swapped out for a wreath with a bow.

Even though the times were different then with smaller coin productions, the Chain Cent Cheryl found is rarer simply because its design was so short lived. Unfortunately, her cent isn’t in great shape. You just can’t expect much when a coin is made from copper and it’s fully exposed to the elements for over two centuries. Nevertheless, its an exciting find anyone would love to dig up and it’s a fun story.

I found the best coverage for this story on The Sentinel website. You can click here to read it.