Coin Designs What are Coin Planchets? Are They Worth Anything? 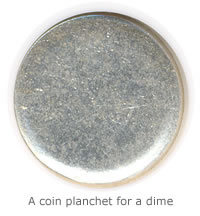 A coin planchet is a metal, rounded disk containing the blended alloys that makeup a coin.

When I think of a planchet, I’m reminded of medieval movies where a smith pulls a long piece of metal from a fiery pit and then pounds away on it, forming a sword. Prior to the final strikings, the raw metal is somewhat similar to a coin planchet – it has the proper metallic content and general shape but it’s clearly just a piece of unfinished metal.

In the case of coins, the metal planchet has a rounded shape and raised rim. (Before the rim is raised, the metal disc is usually referred to as a “blank”.) Planchets are struck and pressed at US Mints, creating the final coin image.

If a coin planchet is just a piece of unfinished metal, how can it be worth anything? Certainly there’s inherent value to the metal itself. Generally speaking, however, unless it’s a larger planchet containing a high percentage of platinum, gold or silver, very little value will be due to its content. Instead, the value comes from the fact that the coin planchet was involved in the US Minting process. 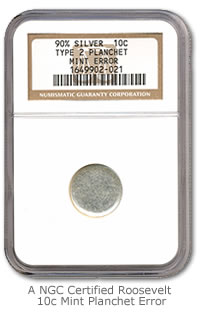 More notably, the planchet was an ERROR that escaped US Mint quality assurance eyes and made it to public circulation. There’s an attraction with many coin collectors for this type of historical error or uniqueness.

Many coin dealers sell error coins. The various coin grading companies also classify them. If you happen to find an error coin or planchet in your pocket change, don’t throw it away. Legitimate coin errors can be sold for top dollar. As of this writing, the photo of the NGC Certified 10c Planchet Error was sold for nearly $50. Some coin errors are sold for tens of thousands of dollars!

[…] made from 22-karat .9167 fine gold! And they were proofs! Yes, real gold proofs struck on the same planchets as the half-ounce gold American Eagles. Nice. Very nice indeed. I’ll take one of […]

[…] coins was when I gave a proof coin as a gift. A proof coin is specially minted with polished planchets and dies and is struck multiple times so it shines more and has great looking detail. They’re […]

What is the Best Coin Gift and How Do You Get Started?

[…] on TV Anchorman Flips $3 Million Dollar Liberty NickelHandling and Storinge Collectable Coins on What are Coin Planchets? Are They Worth Anything?JD on Pennies and Nickels Not Worth the Metal They’re Printed […]

Proof Coins - What Are They? What Should Know About Them?

[…] blanks are specially treated, hand-polished, and cleaned to ensure high-quality strikes. The blanks are […]

I think I have a Copper penny planchet 1956 w a leafy one cent back!! Contact me and let me know if its rare?

I have a 1995 planchet dime can anyone tell me what it is worth. Thanks

I have two dime planchets that are both totally blank on both sides. About the only thing I do know is that they are not pre 1965 by looking at the sides. I’m not sure what to do with them, there isn’t any coin shops around where I live.
Thanks
Tom

Tom
If they have a copper band they are clad. Not interested.
If they are silver on the edge no copper.
I’d be a buyer at $25 for the two including shipping.
John

John,
They are newer ones, with copper, otherwise I would hang on to them for the silver also, but Thanks.
Tom

I have a 1996D pennie that I im not sure if its a planchet error or a blow hole? Its right on and around the L in Liberty. Can you help me? I can send pics

Christine,
I’m sorry I cannot help you, I myself was looking for help, and as of yet have not received any information about them, so I am in the dark as much as you.
Sorry, wish I could have been of some help
Tom

Can anyone buy a blank planchet roll from a mill or are they sold only to the Mint?

Hi, I’m not sure what I’ve found but I’m defiently thinking its an error of some sort. I have a 1983 no mint mark penny which clearly has a noticeable “o” pressed on the reverse side left of the T in CENT also a defect on the C in CENT reverse. This coin has multiple errors that i have noticed. On the obverse side there are also possible “o’s” or doubling that are in the same area as reverse, in the “G” in GOD, “E” in WE , “T” in TRUST noticeable “o” or “9” on right side of rim… Read more »

I just came across a 2007 Wyoming planchet while cashing in my Christmas change jar. First I’ve ever seen.

I have a blank planchet penny that was partially stamped at the very bottom and doesn’t have a date. Is it worth anything