Tags Orbit and Beyond Series

Tag: Orbit and Beyond Series

The space shuttle Columbia was hailed as a great achievement when it first launched into orbit on April 12, 1981. The relatively short 54...
Read more
Australian Coinage and Numismatic News

Commemorating the 40th anniversary of a technological and historically significant event, The Perth Mint has released the First Man On The Moon 2009 Silver Proof 'Orbital' Coin. This coin is the fourth of five in a set of releases that are part of the Perth's Orbit and Beyond series. 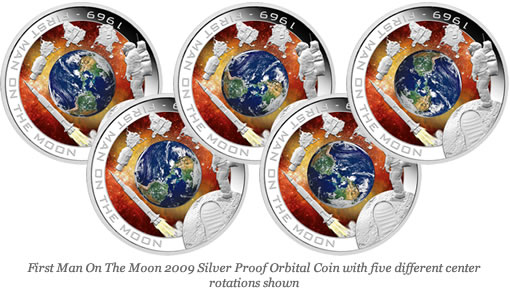 The innovative series capitalizes on the Perth's abilities to create unique pieces. The Orbit and Beyond coins feature an outer ring design that really orbits around the colored image of Earth in the center.

"... I believe that this nation should commit itself to achieving the goal, before this decade is out, of landing a man on the Moon and returning him safely to the Earth. No single space project in this period will be more impressive to mankind, or more important in the long-range exploration of space; and none will be so difficult or expensive to accomplish."

The Perth Mint describes Leonov's historic achievement: Exiting the Voskhod II capsule 500km above Earth, Leonov floated in space for more than 10 minutes before attempting to re-enter the airlock.  Alarmingly, his space suit had inflated, forcing the courageous cosmonaut to vent air before being able to squeeze back inside to rejoin compatriot Pavel Belyayev.

Gagarin Space Coin Launched from The Perth Mint of Australia

The Perth Mint of Australia has launched an innovative rotating coin commemorating the first man in space. The legal-tender, 1 oz silver coin celebrates the journey of Yuri Gagarin, who became the first person to enter space and orbit Earth for 1 hour 48 minutes aboard Vostok 1 on April 12, 1961.

The limited minted coin marks the second release in the Perth Mint's successful Orbit and Beyond Coin Series.

Gagarin's flight ushered in a new era of manned space exploration that the 2008 Yuri Gagarin silver proof coin memorializes in a most unique way.

The .999 fine silver coin is constructed to rotate or "orbit" around a central brass representation of a colorful earth.

Orbital Coins Blast Off from Australia with Sputnik in Mind

The Soviet Union launched Sputnik on October 4, 1957. The world's first artificial satellite was about the size of a basketball, but it didn't...
Read more