The fifth coin in the series "Austrian Railways" to be issued on 17th June, 2009, is dedicated to the electric train. What began as a fair ground attraction in 1880 in the Vienna Prater rapidly became the most revolutionary step in transportation since the harnessing of steam almost a century before. 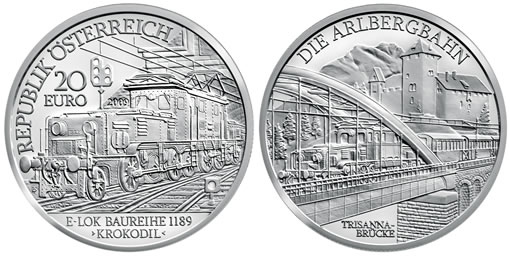 The first electric train in Austria was a small locomotive circling in the great exhibition pavilion in the Prater on the occasion of the Emperor Franz Joseph's 50th birthday. The same monarch issued a licence two years later in 1882 for the first public electric railway.

It used direct current and was a five kilometer long stretch carrying day-trippers from the country town of Mödling into the popular Brühl valley. Other short branch lines soon followed. The introduction of alternating current proved the most reliable for longer railway lines, and in 1911 electric engines using alternating current were put into service on the 90 kilometer stretch to the pilgrimage centre of Mariazell. 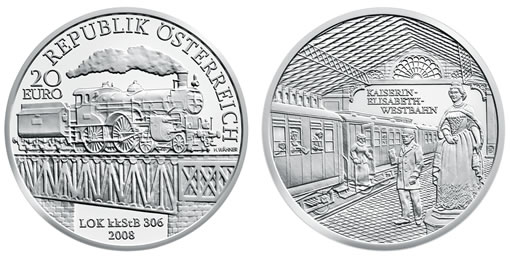 The “Belle Époque” covers the period of the late 19th and early 20th centuries. It was a time when trains dominated land travel and reached new heights of comfort and luxury for those classes of society which had the money and time to travel.