The “Belle Époque” covers the period of the late 19th and early 20th centuries. It was a time when trains dominated land travel and reached new heights of comfort and luxury for those classes of society which had the money and time to travel.

It was a time of famous trains like the Orient Express that ran from Paris through Vienna and Budapest down to Constantinople, or the St.Petersburg-Nizza-Cannes-Express, the so-called “Train de Grands-Ducs” that carried the Romanov grand dukes and aristocracy fleeing the Russian winter to warmer southern climates.

From 1894 the luxury trains of the Belgian Compagnie internationale des Wagons-Lits et des Grands Express Européen carried first class passengers from Ostende to Vienna and then down to the harbour of Trieste or to connections to the fashionable spars of the Danube Monarchy.

In Vienna the railways had outgrown the early stations and the 1860’s and 70’s saw the construction of grand and imposing railway stations that ringed the inner city and acted as terminals for the various lines that stretched out into the provinces and beyond. Among these new buildings in more or less Renaissance style, the North Railway Station stood out as particularly magnificent. The Viennese boasted that it was the most beautiful railway station in Europe.

Designed with a grand entrance and ticket hall, with magnificent stairways under Gothic vaulting supported by marble pillars and carved stone capitals, with sumptuous waiting rooms for the Emperor, his family and his Court, the North Railway Station served the Emperor-Ferdinand-North-Railway line to Prague and to southern Poland until its destruction through bombing and bombardment at the end of the Second World War.

The new 20 Euro silver coin is the third to be issued in the series “Austrian Railways” and will be released on 11th June, 2008. 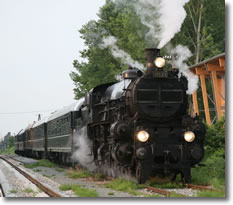 On the obverse it displays the locomotive No. “kkStb 310” which was built in 1911 by the leading engineer, Karl Gölsdorf. The 310 was employed on the routes north and west of Vienna, and one of these engines still plies Austrian lines on nostalgic trips for railway fans.

The reverse side of the coin shows the platform of the North Railway Station with its glass roofing and cast-iron pillars. An elegant lady of the high society at the turn of the century stands waiting for passengers to disembark from the train which has just arrived.

The “Belle Époque” silver commemorative is struck in proof quality only to a maximum mintage of 50,000 pieces. Each coin comes in an attractive box with a numbered certificate of authenticity. A prestigious wooden collection case can be purchased for all six coins of the series.

The first two coins, “Emperor-Ferdinand-North Railway” and “the South Railway, Vienna-Trieste”, have been very well received by collectors and railway fans alike. In September the series will be continued with a coin for the “Empress-Elisabeth-West-Railway”.

When available, the coin may be ordered through the Austrian Mint website.

Darrin Lee Unser - February 6, 2023 3
Rolls, bags and boxes of the newest dollar from the United States Mint become available today at noon EST with the debut of the...