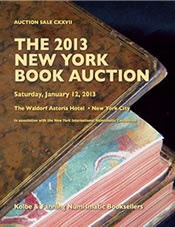 Kolbe & Fanning Numismatic Booksellers have completed the catalogue of their 2013 New York Book Auction, to be held at the Waldorf-Astoria Hotel in New York City on Saturday, January 12, in conjunction with the New York International Numismatic Convention.

The sale is composed of 271 lots of high-quality works covering the entire range of numismatics, with [...] 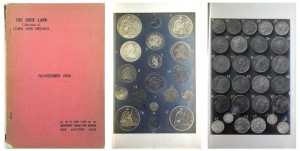 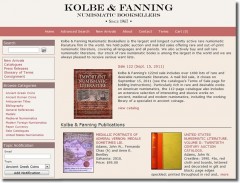 After months of planning and work, Kolbe & Fanning Numismatic Booksellers LLC are pleased to unveil their new and improved website. The firm also announce Mail Bid Sale 122, which features over 1400 lots of rare and desirable numismatic literature.

Numismatic researchers and bibliophiles are invited to visit www.numislit.com and review new and enhanced features, including: [...] 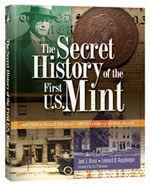 Kolbe & Fanning LLC, Numismatic Booksellers, are pleased to announce that they have been commissioned by the authors to produce specially bound editions of Joel Orosz and Leonard Augsburger's exciting new book The Secret History of the First U.S. Mint, just published by Whitman.

Two special editions are available. The first, limited to 25 copies, is bound in green [...]

Featured were 500 lots on a great variety of topics, including rare works on Russian coins and medals from the Dr. Ira Rezak Library, highlights from the outstanding Latin American Numismatic Library formed by Alan Luedeking, and other important works covering the numismatic spectrum [...]

George Frederick Kolbe and David F. Fanning are pleased to announce that they have combined their numismatic literature firms to expand business opportunities and...
Read more