The top lot was one of several for which records were set in this event, which drew more than 1,000 global bidders in pursuit of exceptional banknotes from a range of countries from around the world.

The East Africa East African Currency Board 10 Florins = 1 Pound 1.5.1920 Pick 10 PMG Choice Uncirculated 63 more than tripled its pre-auction estimate on its way to the event’s top result. Heritage Auctions, the world’s leading numismatics auctioneer, is offering this Commonwealth beauty for the first time in this form.

"The winning bidder just acquired a trophy world banknote." Heritage Auctions Numismatics Vice President Dustin Johnston said. "All extant notes of this short-lived series are very rare, with just three examples of this type graded in the PMG Population Report. The bold colors and ornate design lend to an astounding visual appeal from a golden era of banknote design."

Also racing far beyond its pre-auction estimate to establish a new record was a Hawaii Kingdom Of Hawaii, Department of Finance 500 Dollars ND (1879) Pick 5pp1 Proprietary Proof PMG Choice Uncirculated 63 that brought a winning bid of $66,000, against an estimate of $7,000.

Currency from Hawaii has both American and global appeal, and paper notes from Hawaii issued before the World War II series are incredibly rare, and in many instances, only exist in prototype format. This $500 in Silver Coinage note is only known in Proof format; the offered note is one of just seven examples graded by PMG in Proof format, and is just the second example offered through Heritage Auctions.

A Serial Number 8 East Africa East African Currency Board 50 Florins = 5 Pounds 1.5.1920 Pick 12 PMG About Uncirculated 55 drew 10 bids before it finished at $45,600. The 1920 series of Currency Board notes denominated in Florins was short-lived, as Shillings notes bearing the date 1921 were issued shortly thereafter. This lot is just the fourth issued example offered at auction in the last decade, and one of just five examples are currently graded by PMG, which underscores the rarity.

A Trinidad & Tobago Canadian Bank of Commerce 100 Dollars 1.3.1921 Pick S113 PMG Very Fine 25 from the Canadian Bank of Commerce and issued in Port of Spain ended at a record $38,400. From 1905 through 1939, Trinidad and Tobago issued small-denomination notes. This amazing $100 is the first example offered by Heritage Auctions in issued format and likely is the first example graded by PMG.

One of just four PMG-graded examples of an East Africa East African Currency Board 20 Florins = 2 Pounds 1.5.1920 Pick 11 PMG About Uncirculated 55 closed at $32,400. This rarity is one of only a few known in private hands and an iconic African and British Commonwealth type note.

Other records included but were not limited to:

Complete results can be found at HA.com/4039.

No Confederate States of America notes I see.

Neither were there any Kaiser Wilhelm II notes from East Africa (1905). 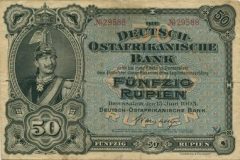