The historic 62 troy pound gold "Carson Bar" recovered from the 1857 shipwreck of the S.S. Central America has been sold by Rare Collectibles TV (www.rarecollectiblestv.com) for $2+ million. The anonymous buyer is described as a collector who specializes in historically significant, rare U.S. coins with an emphasis on the California Gold Rush.

Discovered in 1988, this famous ingot was made during the Gold Rush by San Francisco assayers Justh & Hunter. It later received the nickname "The Carson Bar" after it was held on camera in May 1991 by the popular host of the NBC television program, "The Tonight Show Starring Johnny Carson."

Bob Evans, the chief scientist on the Central America discovery and recovery missions, brought the hefty gold bar for an interview segment with Carson who was impressed by the retrieved sunken treasure.

"Because the ingot weighed over 50 pounds, two NBC-TV stagehands had to carry it onto the set, but during the unrehearsed segment on the air, Carson grabbed it by himself with both hands," Evans recalled. "The King of Late-night wrestled with the King of Gold Bars. As he held the big piece of yellow metal…I watched as concern crossed Johnny’s face. Gold, mind you, is around 50% heavier than lead, which is usually regarded as something very heavy. Seated only five or six feet away, I saw Johnny’s body grow tense, and the veins bulge in his neck… This became a brief competition between man and mass."

"This enormous gold ingot is one of America’s most important artifacts of the California Gold Rush. This piece of sunken treasure was found in the wreckage of the Central America, a sidewheel steamship that sank off the coast of the Carolinas in 1857. The loss of the gold aboard the SSCA was extremely detrimental to the US economy and was one of the financial factors that led to the Panic of 1857," explained Jack McNamara, co-founder of Rare Collectibles TV.

While 30,000 pounds of gold was aboard the Central America in the form of ingots, coinage, and dust, only a small portion of the gold was large bars.

This massive 754.95 troy ounce gold ingot is one of the largest to be found on the ship and the third largest California Gold Rush era ingot known to still exist.

"Rarely do we see national treasures of this magnitude change hands," said McNamara. "It is great to know it is safely placed in such a worthy and distinguished collection. Being able to help facilitate the sale of this iconic piece of U.S. history is easily one of the highlights of my career. I look forward to placing more national treasures with clients in the future."

Evans said the interview segment with the gold ingot underscored Johnny Carson’s well-earned reputation as someone who loved spontaneity and didn’t mind being the brunt of a joke or comical situation.

"For my May 10, 1991 interview segment on The Tonight Show, I took the biggest gold bar we had recovered up to that time to be on what was the top show on late-night TV, along with some other wonderful pieces of treasure. During the commercial break just before I was to go on the set, the stagehands carried the bar and the other wonders I had arrayed on a tray — from the NBC cafeteria! — and placed them carefully on Johnny’s desk, then covered the tray with blue felt I had provided.

"Soon I was on set in the bright lights. After a warm welcome, some information about the S.S. Central America and its history, and some video of Nemo the undersea robot retrieving treasure from the shipwreck, Johnny couldn’t wait any longer. It was time to tackle the big loaf of gold hiding under the felt," said Evans.

"Well, let’s show this one now! Because this is a gold bar!," the Tonight Show Host exclaimed.

Johnny confidently unveiled the big 754 Oz. gold ingot, his own first personal look at the "prop" of the moment. He continued to gush observations and questions as he assessed the size, "about twelve inches long and three inches wide or something." Then he began to pick up the heavy bar of gold.

"We continued to banter about the maker, Justh & Hunter, and the weight, the weight having become the center of conversation during Johnny’s lift and show and tell. As we spoke Johnny tried to put the bar down gently. He lowered it until it rested on his fingers on the desktop. He found this distressing as it crushed his fingers, so he lifted the bar half an inch and dropped it back on the desk with a clunk, louder than he expected," explained Evans.

Recovering quickly from his self-inflicted if unexpected workout, Johnny exhaled,

"How many bars like that are down there, Bob? Have any idea?"

Evans replied, "We have a lot of smaller bars. The big ones are very rare. There may be a few more."

Rare Collectibles TV was founded in 2014 by numismatic experts and lifelong coin collectors Jack McNamara and Rick Tomaska. The company’s mission is to collaborate with collectors to curate their personal dream numismatic collection with the most eye-appealing coins available. Jack and Rick believe in the historical value of a coin and approach every numismatic collection as a learning experience. Their goal to provide as much significant information about that coin’s background and story as possible. Every collection weaves a unique story and RCTV is dedicated to educating collectors with regard to the history and stories that coins tell.

I got so caught up in the first/last American silver and gold eagle auctions that I missed this one.

Got a spare couple of million dollars laying around?

Speaking of dollars and auctions, as witness the final results the U.S. Mint-initiated auction was apparently everything it was meant to be and more:

The gold went for triple my expectation. The silver was tenfold what I expected.

Those are Weimar prices.

P.S. The Weimar Republic was Germany’s government from 1919 to 1933, the period after World War I until the rise of Nazi Germany. It was named after the town of Weimar where Germany’s new government was formed by a national assembly after Kaiser Wilhelm II abdicated.

When there was a million Reich’s Marks note. 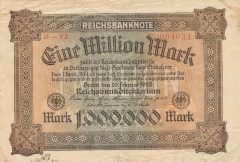 Hard to believe it’s been thirty years since he last hosted the Tonight Show!

I think they got their numbers wrong about the weight. Johnny wouldn’t have been able to hold that bar the way he did if it weighed that much. Do the math for a 754.95 troy ounce bar. 75.495 sounds more like it.

That final weight of 51 3/4 pounds is not in any way beyond a person’s capability to lift. During my twenty-seven years as a distribution manager at a caulking manufacturer I consistently pitched in lifting cartons weighing anywhere from 52 to 62 pounds every day. While admittedly very tiring it was certainly not impossible.

The way he’s lifting it in that picture, doesn’t look like he’s lifting 51.75 pounds. I’m skeptical of the weight they’re giving for that gold bar.

That would have been a good question for Carnac the Magnificent to divine an answer.

Except, Johnny wouldn’t have had the strength to lift the envelope after hoisting that gold bar! 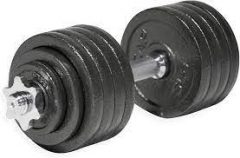 Gosh, guys, I’m now having to rethink the entire memory I imagined I had of the reality of my work experience. I’m trying to work my way back through the thick fog of time to visualize the supposedly hundreds of times a day I lifted those purported sixty pound boxes off the ground to the top of an allegedly four deck tall pallet, since obviously nothing like that could ever have happened. Oh boy, it’s tough getting old and losing track of what must really have occurred.

Is it possible you’ve been retired for so long, your previous employment is lst..sf.df;’f’ Where was I again?

Grasshopper,
Did I not tell you to stay on the rice paper and to abstain from the rice wine? Or perhaps you imagined this to be “backwards day”?

Retirement has made you weak, old one.
Enjoy your Labor Day weekend. If it’s not fun, we can’t have that. 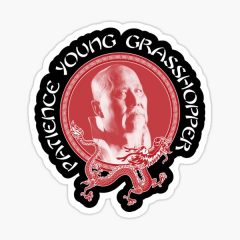 By the way, Antonio, the above pictured actor Keye Luke who played Master Po in the Kung Fu television series once starred as Number One Son in the Charlie Chan mystery movies. 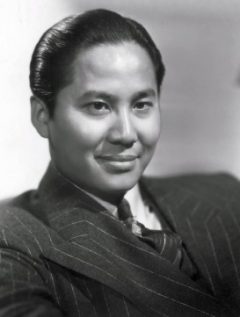 And another interesting fact, James Hong also was in the Charlie Chan mystery movies. One of the most prolific actors. 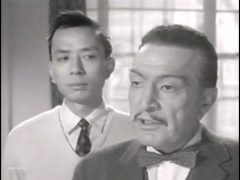 Not to mention, Antonio, that all three of the actors who each in turn played Charlie Chan were of White European heritage and had to learn how to speak American English with the usual cheesy, contrived 1930’s-40’s “Chinese accent.” On the other hand the various (numbered) sons, who were portrayed by authentic Chinese-American performers, were allowed to speak “regular” American English.

It took me a while to remember, but ever since you added James Hong to this conversation I’ve been trying to recall the name of one of my favorite character actors of the ’60’s-’80’s who was yet another caucasian gent recruited to play asian (and native American) movie parts, the always fierce-looking Henry Silva. 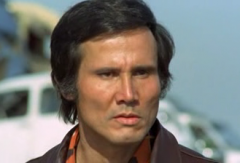 I’m enjoying your special take on “The Unbearable Lightness of Being”, with the relevant oppositional substitution of “Heaviness” for “Lightness”.

A favorite movie of mine. My favorite line, “Welcome to Geneva”. I like the music, especial the Czech version of Hey Jude.

My maternal grandmother might have enjoyed that, as she was from Brno, the capital city of the Czech province of Moravia.

She may have enjoyed Joj, joj, joj sung by the magnificent Jarmila Sulakova. Another favorite of mine.

Kaiser — So you worked for a Caulking Manufacturer? Maybe you could answer a question that has been on my mind for many years. The Caulk is mixed in a big Vat and then drawn from and pushed into the tube we all use using a big machine. What is the name of machine that does that? Is it a Caulk Sucker? Just curious ….
— Mike

At the factory the process of sucking the soft caulk into the cartridges was by appearances somewhat sexist since only women ever worked that machine.

How enlightening! And exciting. Out of curiosity were the tips of that machine chrome plated … or, shall I say, chrome plated initially?

For protection of the user, there was a rubber cover on the tip.

Remembering Johnny Carson’s last words before he died… Perched on his stool, his posture, as always, ramrod-straight, Carson said his last words in a lower, warmer tone than usual: ”I bid you a very heartfelt good night.” His voice broke; his eyes watered.

The beginning of the above article specifies 62 troy pounds while that is not so in the caption of the photo with Johnny Carson. There is a really big difference between 62 standard pounds (as the weight is denoted in the caption) and the much lower 51.75 standard pounds that it actually weighed.

Please see my comment below for a more complete explanation. Thank you.