Funded only by donations, the nonprofit Anti-Counterfeiting Educational Foundation (www.ACEFonline.org) worked with law enforcement agencies in 2020 to protect collectors, dealers and the general public by helping remove from the marketplace over $1 million of counterfeit rare coins and precious metals items, according to a year-end update from the foundation.

Among the cases, ACEF and its Anti-Counterfeiting Task Force (ACTF) assisted Customs and Border Protection investigators in seizing over 1,500 counterfeit silver American Eagles at Dallas-Fort Worth International Airport and aided two investigations by the U.S. Treasury Department’s Office of Inspector General (OIG) involving the seizure of fake rare coins valued at over $450,000.

"The ACEF Task Force has over 80 active cases being reviewed and investigated. During 2020 we assisted law enforcement agencies in locating and seizing over $1 million dollars in counterfeit coins and precious metals," said Davis who conducted a half dozen anti-counterfeiting seminars for law enforcement officers across the country during the past year.

With assistance from the Anti-Counterfeiting Educational Foundation, New Jersey legislators are considering a law that would impose criminal penalties for anyone selling counterfeit coins and precious metals.

"To effectively combat counterfeits, all states need to have statutes that address counterfeit coins and precious metals and provide criminal penalties. This would allow local, county and state law enforcement officers the tools to investigate, arrest and prosecute counterfeit coin and precious metal cases at a state level. ACEF is in the process of identifying states that do not have current statutes and providing legislators with a model bill for review and adoption," said Davis.

"The work of the Anti-Counterfeiting Task Force is supported entirely by donations made to the Anti-Counterfeiting Educational Foundation, a non-profit corporation," emphasized ACEF Executive Director Robert Brueggeman. "The donations, large or small, are making a difference to help prevent collectors, dealers and the general public from becoming victims of fakes."

Monetary contributions can be made online at www.acefonline.org/donate or by check mailed to ACEF, 28441 Rancho California Rd., Ste. 106, Temecula, CA 92590. For additional information about donating, contact ACEF Executive Director Brueggeman at info@ACEFonline.org.

As a collector I have witnessed the selling of these fakes in adds on Facebook. The biggest Red Flag is the fact that they are being advertised for under the spot price of the specific precious metals. I have seen Morgan Silver Dollars advertised for way under their market value and the picture and often times video presentations have shown them void of the customary scratches from their well known distribution in bags and marketed as Brilliant Uncirculated. In every case I have made comment to the site that buyer beware of this scam and explained the nature of deceit.… Read more »

As soon as I shared this story and I checked it out right below it on Facebook is this add for Indian Head 2 1/2 Dollar Gold pieces selling for a range from $49.98 and up. Under the umbrella of Highpoins Shop which if you go to their Facebook Page you see that under their description they are dedicated to providing high quality products, but the only thing I see is clothing apparel and limited at that, no coin advertisement. 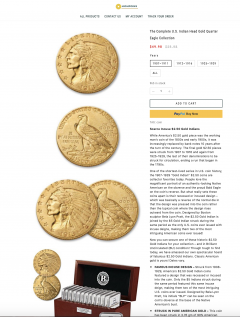 Something obviously fishy about Highpoins Shop. Don’t give them a cent!

I added to my shopping cart, bu intuitively I thought I’d check them out. What tipped me off beside the low price tag of $7.50 pr Morgan coin was the registrant of their ICANN account. A “Beijing Innovative Linkage Software Service Co. Ltd ” But could this mean the market is flooded with fake Morgan dollars? <gulp>.

Glad I did not check out, otherwise they woul have had my financial information too.