Five coins uniquely designed to help celebrate the 150th anniversary of Canada are now in circulation, the Royal Canadian Mint announced this week. 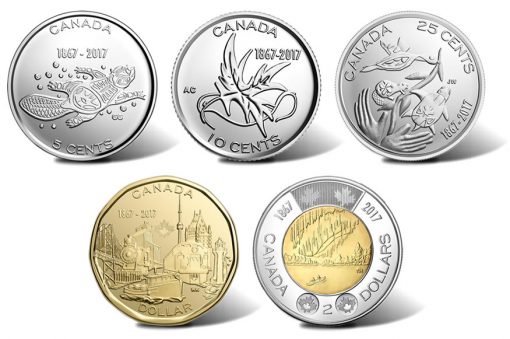 On July 1, 1867, the colonies of Canada, New Brunswick, and Nova Scotia joined to form the semi-autonomous federal Dominion of Canada, marking a major milestone that led to the country’s full independence. Canada Day on July 1 celebrates the anniversary.

"Like the rest of Canada, the Mint is looking forward to July 1st to celebrate everything that makes our country great," said Sandra Hanington, President and CEO of the Royal Canadian Mint. "Over time, the Canada 150 circulation coins will become lasting keepsakes of this incredible year, so find them and hold on to them for future generations to enjoy."

First unveiled in November, the circulation coins include the newly designed 5-cent, 10-cent, 25-cent, loonie and toonie coins. Their designs were selected from thousands of entries in the My Canada, My Inspiration contest. Designed by Canadians and voted on by them, the coins and their designers include:

A limited number of the 25-cent and two-dollar coins feature color. The two-dollar coin is also the world’s first colorizedd bimetallic coin and the first circulation coin to feature glow-in-the-dark technology.

The Canadian Mint has also launched a series of collector products in celebration of Canada 150, like the 8-coin collector card and 12-coin set.

To see all the Mint’s 150th anniversary products, visit www.mint.ca/canada150.

Compare the 1967 Centennial designs of the quarter and nickel to these new designs. The childish-looking-artwork of these newer ones is sadly laughable. Yes, the 1967 rabbit and Lynx were only animals, but they were great representations of these natural creatures. The animals on these new ones remind me of the kind of coloring work a 5-6 year old does. The regal and expertly designed concept, thankfully, was kept in the other coins shown. Canada, its time to get back to being the producer of great artwork on the coins that represent your Dominion. Show the world you have good… Read more »

I suspect it is safe to say that the choice of Mi’kmaq art for the five-cent coin was not motivated by a desire to appeal to those who find indigenous art equivalent to kindergarten art. The artist for the quarter was eight years old. #MakeCanadianCoinsGreatAgain