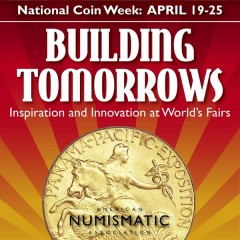 "Building Tomorrows: Inspiration and Innovation at World’s Fairs" is the theme for next year’s annual National Coin Week, the American Numismatic Association (ANA) has announced.

Every third week of April, the ANA and its members celebrate National Coin Week with special numismatic exhibits, events, fun educational activities and other programs honoring a historic event or person and its impact on coins and paper money.

They have "long celebrated mankind’s achievements in science, architecture and social progress," describes the ANA.

Activities and resources scheduled for the 2015 National Coin Week include:

The "World’s Fair" theme coincides with the 100th anniversary of the 1915 Panama-Pacific International Exposition in San Francisco. The idea was submitted in a theme contest by Esther Leising. Leising will receive a 2014-P Proof Civil Rights Act of 1964 Silver Dollar for her winning entry.