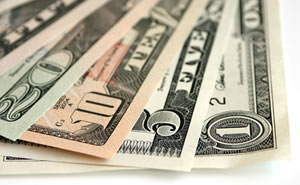 The US government printed less money for circulation in September than in any month since February, data from the agency responsible for producing U.S. currency shows, and the combined value of the notes was the lowest in almost a year.

In month-over-month comparisons, September saw 15.4% fewer notes than in August and their combined value was 42.9% lower. By denomination, there were:

In September, the BEP printed 640,000 $100 star notes. These are indicated by the "*" designator in the production chart directly above. Star notes are replacements for misprinted notes or certain serial numbers, like 000 000 000. Money collectors find them more desirable since they are rarer, making them difficult to find.

As a perspective, the BEP in Fiscal Year 2013 manufactured about 26 million banknotes a day with a face value of about $1.3 billion. Approximately 6.6 billion notes went out for the year at an average cost of 10 cents per banknote. The BEP notes that more than 90% of paper notes printed each year are to replace those already in, or taken out of circulation.