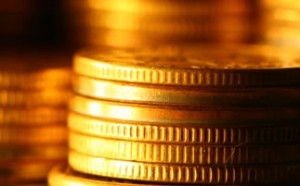 Gold prices retreated Friday after notching an 18-week high in the previous session, but the precious metal still scored a weekly gain — its fourth in five weeks.

Gold saw late week pressure as U.S. jobs data for February came in better-than-expected with employers adding 175,000 to the payroll after creating 129,000 jobs in January.

The jobs number was "not a blockbuster event, [but] it does end a downtrend of the past couple reports and turns around labor participation, which has been at levels last witnessed in the late 1970s," MarketWatch quoted Jeffrey Wright, managing director at H.C. Wainwright.

The U.S. dollar turned higher following the report and gold resultantly moved lower. On the flip side, gold prices earlier in the week saw support over Ukraine-Russian tensions.

"If the situation in Ukraine gets worse, prices will go higher. However, if the crisis is resolved, gold could fall back to $1,320," Reuters quoted Yuichi Ikemizu, branch manager for Standard Bank in Tokyo.

Majority participants in last week’s gold survey by Kitco News missed the mark with their expectations of falling prices this week. Though in fairness, the survey was taken before Russia’s move into Crimea which boosted safe-haven demand that was highlighted by an almost $29 run-up in gold prices on Monday. Participants in Kitco’s latest survey are split over gold’s direction next week.

"In the Kitco News Gold Survey, out of 33 participants, 21 responded this week. Ten see prices up, while six see prices down and five see prices trading sideways or neutral," reports Kitco News.

Silver was poised for a solid weekly gain until plummeting on Friday with the May contract off 65 cents, or 3%, to $20.93 an ounce. Silver prices on the week ended down 31 cents, or 1.5%. Its year-to-date gain dropped to 8%.

PGMs split on Friday but, like gold, advanced for the week. In their breakdowns on Friday:

As for the week, platinum jumped 2.5% and palladium soared 5%. They have gained support over supply concerns. Russia is the world’s biggest producer of both platinum and palladium.

London precious metals were mixed on Friday but gained from a week ago. When comparing the London fix prices from Thursday PM to Friday PM:

U.S. Mint sales of American Gold Eagles continued at a depressed rate this week while demand for American Silver Eagles remained strong even as the Mint rations their sales. In week-over-week bullion sales comparisons:

Below is a sales breakdown across U.S. Mint bullion products with columns offering the number of bullion coins sold on Friday, for the week, last week, in February 2014 and for the year-to-date.

Read about U.S. Mint bullion sales in February for a recap on coin performances last month.

Why is it taking so long for the mint to price out the new Baseball Coin for 2014? All the material has been purchased and the coins should be almost done, so why not let people know the price?

They’re probably trying to find someone to make packaging for the weird shape of the coin.