Bureau of Engraving and Printing (BEP) BEP and US Mint at ANA Money Show, Signings by Rosie Rios 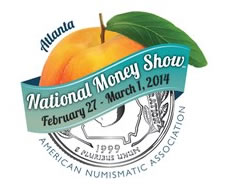 New coin and currency products will get introduced at the ANA National Money Show in Atlanta, the United States Mint and Bureau of Engraving and Printing (BEP) have announced.

As already discussed on CoinNews.net, the BEP will introduce two new products on Thursday, $100 uncut currency sheets and 2014 Army Intaglio Prints. The currency sheets include the newly designed $100s, and are a first time ever product. The Army Intaglio Print is the first of five in the BEP’s Defenders of Freedom series. They will be available at the show as well as online beginning Thursday at 8:00 a.m. through www.moneyfactory.gov.

"The BEP is showcasing its Billion Dollar Exhibit, which features more than $1 billion worth of rare antique currency, including sheets of $100,000 currency notes, Treasury Bonds, and Gold and Silver Certificates," a BEP news release noted.

The National Money Show in Atlanta features one of the largest bourse floors of the season. There are tons of collector exhibits, rarities in the ANA’s Museum Showcase, dealer tables, and other gripping sights to see, as well as educational programs and special events.

Then of course, there are displays from the United States Mint. Coin collectors will want to stop by the BEP/Mint booth to check out new and upcoming U.S. Mint products, like the 2014 National Baseball Hall of Fame Commemorative Coins. There is a lot of buzz surrounding these first ever curved coins in clad, silver and gold.

The U.S. Mint will have these and other products available for sale:

I wish I could go.

Was lucky enough to get there in time to meet her and have some items signed. She was very gracious and funny. If you are in the Atlanta area, this show is worth visiting. Just seeing the Saddle Ridge Hoard coins, and the 1913 V made it for me.