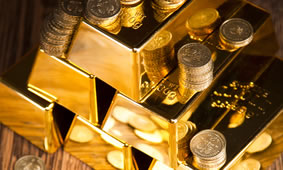 "With the FOMC meeting over and its results mostly digested it appears, at least for the near term, the winners are the U.S. stock market and the U.S. dollar. The loser is the gold market," said Jim Wyckoff, a senior analyst at Kitco Inc, in a daily note.

"While investors, traders and market watchers had pretty much factored into most markets’ prices Wednesday’s FOMC news, the surprise to many was that the stock market rallied sharply."