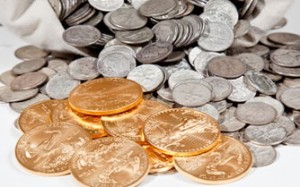 Gold for February delivery declined $32.30, or 2.6%, to close at $1,224.90 an ounce on the Comex division of the New York Mercantile Exchange. Gold prices traded from a low of $1,222.60 to a high of $1,256.50. The precious metal was pressured, opined analysts, on a stronger U.S. dollar and on higher expectations of early stimulus reduction.

"Technical selling pressure re-emerged due to a lack of fresh, bullish fundamental news. The higher U.S. dollar index Thursday was also a bearish ‘outside market’ factor for the precious metals markets," said Jim Wyckoff, a senior analyst at Kitco Inc, in a daily note.

"Selling interest in gold Thursday was also partly attributed to the U.S. budget deal reached between congressional Democrats and Republicans this week… Remember that the last budget impasse and U.S. government shutdown played a part in the Fed holding off on a tapering move."

Gold prices dipped 0.3% on Wednesday after rallying 2.6% over the prior two sessions.

In PGM futures, palladium declined for the first time since Monday while platinum settled lower for a second straight session. In prices on Thursday:

U.S. Mint bullion sales for the week so far, for the month through Dec. 12, and the year-to-date are listed below.