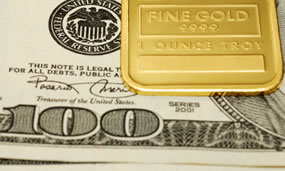 Gold prices have traded traditionally this week, falling when the U.S. dollar gains and advancing when it weakens. The greenback picked up ground on Thursday after the ECB’s surprise rate cut, and gold lost all but 40 cents of its prior day gain.

"Precious metals, like all the other markets, came to life when the ECB surprised everyone with a 25 basis-point interest-rate cut," MarketWatch quoted Fawad Razaqzada, technical analyst at GFT Markets.

"News of a surprisingly good U.S. third-quarter GDP weighed further on the metals as that gave investor even more reason to pile into the U.S. dollar … and out of safe-haven metals."

The European Central Bank sliced interest rates to a record low, easing its main refinancing rate to 0.25% from 0.5%. Also on Thursday, the Commerce Department said the U.S. gross domestic product climbed at an annual rate of 2.8% in the third quarter, much better than the expected 2% increase and the 2.5% growth rate in the second quarter.

In PGM’s on Thursday:

On Thursday, United States Mint bullion sales advanced for gold coins but were muted for silver coins. The only gold coin not to increase was the one-half ounce, or $25 denominated, American Gold Eagle.

Bullion sales by day, for November, and the year-to-date are listed below.