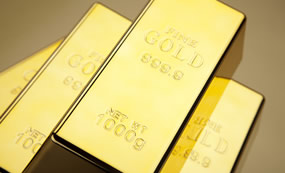 Precious metals futures closed higher Wednesday, with gold and silver gaining for the first time in at least three days and PGM’s rebounding from their losses on Tuesday.

Gold for December delivery added $3.80, or 0.3%, to settle at $1,349.30 an ounce on the Comex division of the New York Mercantile Exchange. Prices ranged from a low of $1,338.30 to a high of $1,359.60. The yellow metal advanced on dollar weakness but did turn lower in after-hours trading when the Federal Reserve’s Open Market Committee released its monthly monetary policy statement. Prices were last checking in at around $1,343 an ounce.

"As expected, the FOMC left its very accommodative U.S. monetary policy unchanged. However, many markets deemed a bit bearish the FOMC’s remark that the U.S. economy does not have as much downside risk as that seen in previous months. Traders and investors extrapolated this to suggest the Fed could start to ‘taper’ its monthly bond-buying program (QE) a bit earlier than many now reckon," Wyckoff added.

Also in regular trading, silver for December delivery gained 49 cents, or 2.2%, to finish at $22.98 an ounce. The precious metal ranged from $22.39 to $23.10. In later electronic trade, the white metal had given back about half of its earlier gain.