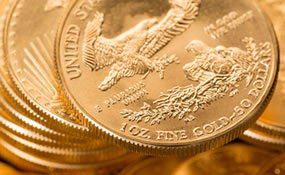 Gold moved up sharply and closed near a five-week high Tuesday, extending its winning streak to two straight days with advances in four of the last five sessions.

Gains came after news of a weaker-than-anticipated U.S. jobs report which sparked speculation that the Federal Reserve will keep its monetary stimulus as is in the months ahead.

"We were not even close to the 180,000 number… the main takeaway is that Fed tapering is still a long way away, probably not for this year and that’s the reason why everything shot up – equities, commodities and gold in particular," Societe Generale analyst Robin Bhar was quoted on Reuters.

While gold and silver have turned up for two days in a row, PGMs have notched daily gains going back a week. In their latest increases:

United States Mint gold bullion sales grew sharply Tuesday with advances across all four American Gold Eagle sizes. U.S. Mint distributors ordered 9,500 ounces on top of the 3,000 ounces from Monday. The two-day total of 12,500 ounces is higher than sales through all of August and is 500 ounces shy of matching sales from September.

American Gold Buffalo and American Silver Eagle coins also moved up. Their breakdowns and that of the American Gold Eagles are below.

Indeed, the price of gold seems to be soaring today, up $24.60 already.