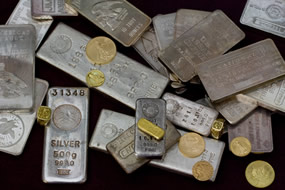 Gold for December delivery tacked on $1.20, or 0.1%, to finish at $1,315.80 an ounce on the Comex division of the New York Mercantile Exchange. The precious metal traded through a narrow range of $1,312 to $1,323.90. Fed expectations are back in the news, as are the latest U.S. jobs numbers scheduled for release Tuesday.

"The price action across markets is clearly starting to reflect the risk that the Fed is less likely to taper its asset purchases in the near term," Reuters quoted Tom Fitzpatrick, analyst at Citigroup’s technical research unit CitiFX.

"The market is convinced that there will be no tapering this year," Adam Klopfenstein, a senior market strategist at Archer Financial Services Inc. in Chicago, said in a telephone interview relayed on Bloomberg News. "Investors will be closely watching tomorrow’s jobs data to gauge the nation’s economic conditions."

In PGM futures on Monday:

Last week, platinum zipped higher by 4.5% and palladium turned up 3.8%.

In total ounces, Gold Eagle sales are at 28,000 ounces for the month, or more than the prior two months combined. Silver Eagles topped 38 million on Monday, a never-before-seen total by October or even November. In record-year 2011 when Silver Eagle sales reached 39,868,500, the 38 million mark was not reached until Dec. 5, 2011.