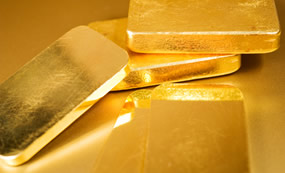 Gold ended barely lower Tuesday, trading within a narrow $15 range. Still, its loss was the third in four sessions.

"After an initial period of calm, gold finally reacted yesterday afternoon to the U.S. budget dispute and the approach of the debt ceiling being reached," analysts at Commerzbank said in a note relayed on MarketWatch.

"As there is still no sign of the dispute being resolved, market players will remain unsettled and interest in gold as a safe haven and crisis currency should increase. Moreover, the Fed will probably postpone its retreat from quantitative easing, which could also help to push prices up."

United States Mint bullion sales advanced across one- and five-ounce coins. In splits by content, gold coins climbed by 1,000 ounces and silver coins went up by 197,500 ounces. Amounts by product type are shown in the following table:

How is the Mint able to sell coins if our government is shut down? Essential services?

To Timbou – – – Good question. Also, How is it the BEP can still print money and see to it that the new $100 dollar bills are being shipped? My answer is: Anything that makes them money they will keep open.