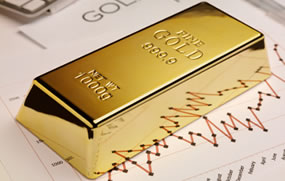 Gold and silver jumped for their first quarterly gain in a year, despite logging deep monthly losses.

In United States Mint bullion coins for September, American Silver Eagle sales slowed a bit but maintained a record annual pace while American Gold Eagles improved over the prior month’s level which was the lowest in six years.

Back to precious metals and final September closings, gold for December delivery declined $12.20, or 0.9%, to $1,327 an ounce on the Comex division of the New York Mercantile Exchange. That drove prices down 5% for the month.

"Gold is disappointing traders who have expected a big rally on dollar weakness and the fear of an imminent shutdown," MarketWatch quoted Kevin Kerr, president and chief executive officer at Kerr Trading International. But, "gold remains very volatile and could suddenly spike should the shutdown take place."

"Gold may be seeing some buying interest due to safe-haven demand amid the U.S. budget and spending debacle. However, it can also be argued recent selling pressure in gold was because it has acted more like a raw commodity ahead of the U.S. budget deadlines,"
said Jim Wyckoff, a senior analyst at Kitco Inc. "It’s likely one of these scenarios will more clearly come to the forefront for gold this week."

Gold jumped 8.4% for the quarter, notching its first quarterly gain since the three-month period ended September 28, 2012 when prices rallied 10.6%. This year’s first quarterly loss totaled 4.8%. The second quarter plunged 23.3% for the deepest rout since modern gold trading began in the 1970s. Gold is now off 28.2% from its 2012 ending price, and it seems headed for a first annual loss in thirteen years.

Silver directionally tracked gold. It ended 7.7% lower in September yet still shot 11.5% higher on the quarter. As for Monday, silver prices for December delivery fell 12.3 cents, or 0.6%, to settle at $21.71 an ounce. The white metal has plummeted 28.2% for the year-to-date.

In PGM futures for Monday, September and the quarter:

For the year-to-date, palladium stands by itself with its 3.4% advance. Platinum has fallen 8.4% from its settlement price in 2012.

The following grid offers a bird’s-eye view of monthly, quarterly, and year-to-date changes across all precious metals.

The following grid summarizes the monthly, quarterly, and year-to-date changes.

September, like August, is usually one of the slower months of the year for United States Mint bullion coins. In ounces overall, gold and silver sales levels were fairly close to August. In monthly breakdowns across U.S. Mint bullion products:

U.S. Mint bullion sales on Monday, in September and the year-to-date follow.

Silver coin melt values dropped in September to further deepen losses for the year. The grid below shows melt values of older circulating U.S. coins that were produced with 90% silver. These coins, at least those that have little to no numismatic worth because they are too common or too worn, are the ones often sought for their silver values.

Coin melt values above are based on London fix silver prices at the end of 2012, June, August and September.