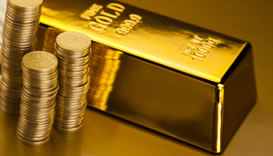 Gold fell modestly in normal trade Wednesday, and then cycled between slight losses and gains in after-hours when minutes from the Fed’s last meeting were published.

Minutes from the Federal Reserve’s last monetary policy meeting offered no guidance to when its buying of bonds would slow.

"Comex gold futures prices were modestly higher in afternoon U.S. trading Wednesday, in a modest ‘relief rally’ after the release of the FOMC minutes from the latest Federal Open Market Committee meeting of the U.S. Federal Reserve," said Jim Wyckoff, a senior analyst at Kitco Inc, in a daily note. "After some initial price gyrations gold and silver prices settled down and then rallied a bit after the release of the minutes."

In PGMs on Wednesday:

For a second day, London precious metals fixings were mixed. On Tuesday, all but gold declined. On Wednesday, gold was alone with a loss. When comparing the Tuesday PM to Wednesday PM London Fix prices: