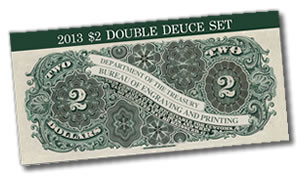 A limited-edition currency set with two $2 Federal Reserve notes made its sales debut earlier today, May 14, 2013.

Both $2 notes are held inside a clear acid-free polymer sleeve for protection. They are then placed in a tri-fold presentation folder that includes information about the two banknotes and set.

Only 5,000 sets will be sold. There is an initial household ordering limit of 25 sets established until May 28, 2013, which is the day they start shipping. After that time, and if any still remain, the BEP will offer bulk pricing for quantities of 25 or more at a reduced price of $29.95 per set.

Orders for the 2013 $2 Double Deuce Currency Set may be placed directly from the Bureau of Engraving and Printing’s online store at www.moneyfactorystore.gov or by calling 1-800-456-3408.

The BEP is the largest producer of security documents in the United States. The bureau prints billions of Federal Reserve Notes for delivery to the Federal Reserve System each year. These notes are manufactured at facilities in Washington, DC, and Fort Worth, Texas.

These will be sold out in less than a week!!

I’m not a paper collector but they’re only unique because they have the same serial numbers. I know finding two of any denomination that have the same serial numbers is a monumental even impossible task but is it worth the extra $30+ to have such a set? At least the BEP is coordinating internally to create this set unlike the Making American History Coin and Currency Set fiasco from 2012.

Perhaps this the only way the BEP can create a set that compares in some way to the Mint’s silver reverse proof or “enhanced” uncirculated silver $.

@jack, I agree, this one is a goner in less than a week.

There is no true collector’s bargain here… unless you like engraving or Scripophily. This is the same type tongue in cheek marketing that caught many coin collectors when they purchased the 2009 Lincoln Chronicle sets (supposedly limited to 50,000 sets)… but they went on to sell more than 50,000 sets. Check their price now… 4 years later. You can find those sets (unopened) from $76 to around $100. Originally those sets started out at $50 and many with defects on the coins. So, What did they do, repackage and resell the coins. Read the Deuce advert print closely… I’ll remove… Read more »

Based on the outragious prices for paper and coins the mint/BEP is charging – they seem to be trying to balance the budget on the backs of collectors.

I stopped collecting modern coins from the mint and don’t plan on start collecting paper from BEP.

It’s amazing the hefty premium the Founding Father’s Set that just sold out is fetching. Yes, we are in the wrong line of work….lol. Happy collecting all!

The BEP’s product page for the set now shows: “Out of stock.”

What sold out? The pre-release stock is sold out? Sure. Now… give it a few months and see what happens…

Since we’ve been watching, the BEP has not “returned” a sold out product for sale or offered it as a component in another product. Their sold out has meant exactly that.

I’m not looking for an argument… but I got caught in the rip-off with the U.S. mint when they said on 50,000 units would be sold. They lied. I feel the BEP may do the same thing. That was my opinion. I was a heavy BEP Souvenir collector years ago when I was a stock collector. I still have those items.

Let’s see what happens. I’m not afraid to admit anything if I am wrong.