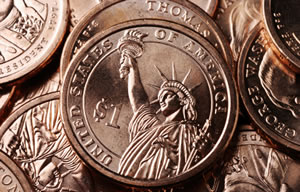 Newly introduced legislation seeks once again to put Presidential $1 Coins on the chopping block. If enacted into law, the proposed bill would strike the current legal requirement to produce dollar coins.

Senator David Vitter (R-La) introduced S.94 on Jan. 23, 2013. Entitled "A bill to terminate the $1 presidential coin program," the proposed legislation is identical to one he introduced two years ago.

Since that time, however, the Presidential $1 Coin Program has undergone a significant change. In December 2011, Secretary of the Treasury Tim Geithner ordered the U.S. Mint to stop striking all $1 coins for circulation. Since then, they have only been minted for numismatic purposes and sold directly by the U.S. Mint.

The $1 coin suspension was initiated as part of a Campaign to Cut Government Waste. At the time, hundreds of millions were produced annually, but most of them shipped to and remained in Federal Reserve Bank vaults. According to estimations back then, there were enough Presidential dollars in storage to meet the circulation needs of the country for more than a decade.

S.94 seeks to amend Title 31, Section 5112 of the United States Code which contains the original authorization for the Presidential $1 Coins. It would remove the legal requirement for the coins by striking subsection (n).

For that to occur, this legislation or similar legislation would need to pass in both chambers of Congress and get signed into law by the President of the United States. The series may still continue even if that happens. Under 31 U.S.C. §5111(a) (3), the Secretary of the Treasury "may prepare and distribute numismatic items," meaning the $1 coins could stay in production if directed by the Secretary.

S.94 is before the Committee on Banking, Housing, and Urban Affairs.

PLEASE Stop! I can’t stand the thought of obama being on a coin. He is NOT worthy…. PLEEEEEASE STOP!!

Ron, unless Obama dies within two years of the program ending, it won’t happen.

The crisis is over – all Presidential coins minted are being bought by collectors and none are being stockpiled anymore. This is a useless bill and a waste of time.

“Campaign to cut government waste”. That’s rich. I saw an article that dumbed down the saga of the national debt so that we taxpayers could grasp it. Just knock eight zeros off and compare it to a family budget. The (poor) family takes in about $21,000 in income, spends about $38,000 each year, their total credit card debt is about $141,000.00. And budget cuts everyone is fighting over total $38.50. Yup thirty-eight dollars and fifty cents. Now add eight zeros and you’ve got the financial snapshot of the USA.

So how’s that “Campaign to cut government waste” working out?

This is just an example of an out of touch Senator putting a bill out to say he is doing something to save tax payers money. jim is right – the coins are now only minted as collector items and paid for as the demand requires – so this bill is a waste of tax payers time and money. Kevin, I read that same analogy several months ago as well. It is sad to think our legislators are so far out of touch with you or I and have no idea “whats in their wallets”.

What’s in their wallets? On top of the salary of taxpayer’s money is lobbiest and private interest money. So who are they looking after? Also, how is the war on paper v metal in one dollar terms? Vitter doesn’t know his a** from his elbow and should not be in congress, but there is his friend Jerry Mander.

send all dollar coins and melt them down. reproduce two smaller and lighter one dollar coin for each current one dollar. everybody should be happy. and the mint or government make 100% profit. why not?. simple solution. isn’t it?.

annie – it’s not the size of the dollar coin that’s stopping people from using them. People prefer paper to metal because metal is more bulky. Generally wallets made with coin purses attached don’t fit easily in pockets. And people who use credit cards instead of cash don’t care much one way or the other.

I have been collecting these coins since the program started,and trying to fill my book now they want to stop it.I remember back when it started i was able to go to my bank and i would buy a roll everytime a new coin came out and continued until they stopped circulating them a couple years ago.I’m glad i saved all my rolls because i know someday they will be passed down to my children and hopefully their children and they ought to be worth quite a bit in 50 to 100 years from now,i see them on ebay selling… Read more »

Annie, $1 coins in Canada, Australia, and NZ are almost exactly the same size and they work fine. The difference is that those countries all also have $2 coins so people don’t have to carry four $1 coins, but somehow we in the US can’t figure out something so simple. And because a $2 coin would be a brand-new size and design, it _could_ be made smaller. Or if we’re SO wedded to paper we can’t give up both low-denomination bills, the BEP could come up with a modern design for the $2 note and print enough to serve the… Read more »

The $1 and $2 Canadian dollar, quarter and nickel coins are also lighter in weight than US coins. A pocket full of coins from Canada won’t cause you to lose your pants. They have also ceased the production of 1 cent coins. Coins do have a much longer circulation life than paper bills. However, in fewer years than it will take for Congress to agree on this issue, paper money and coin production will become as obsolete as the US postal service 1st Class mailed letter (this happened in only 4 short years and say goodbye to Saturday mail delivery… Read more »

I suppose I could have added increased use of Direct Deposit of paychecks, Online Bill payment and Credit and Debit card use to further support reductions in coin and paper currency production in the future. Ah yes, in case you didn’t catch it in the news a First Class postage stamp increased by 1 cent to .46 cents this January. I’m sure that Coins to support the collecting community will continue long after currency production will cease. Did you also hear that bar code scanning and payment at the Store checkout counter is now done by smart phone in Europe… Read more »

The next time there is a big storm or flood and the internet goes down, see how far your credit card gets you. Bet you that currency, even the hated presidential dollars, will work a lot better. Bet you that even the post office will work too. Lets not rap the post office either, the post office is in the constitution, it is one of the fundamental duties of the feds. As for Saturday deliveries, if they had $2 billion more they could continue. Last i heard one of those advanced tactical fighter aircraft cost $1/2 billion. So if they… Read more »

Kevin;
You nailed it best. These stuffed shirts in DC don’t truly give a rat’s ass about govt. waste, because they themselves are piles of govt. waste, and they smell just as bad.

He already is, sort of. The 2012 Native American dollar coin has an image of a horse’s ass on it

Tired of the ones that don’t get it. George does. Keep the truth. FYI the 2 billion in red ink for the post office was in 2011. For 2012 it was close to 16 billion. Getting rid of Saturday delivery will not solve their problems. The issues stem from US law requirements to ship to every corner of the USA. Competing companies ship the cheapest hub and then have the US post office ship it the remaining distance. There are many remote areas in the US i.e. remote villages by plane only in Alaska. Prices are held far too low… Read more »

By the way Ronnie, speaking of asteroids, did you hear over the weekend on CNN; they were talking about the asteroid that’s going to skirt by the earth on the 15th, some “news” babe actually asked the question “could this asteroid possibly be related to global warming?” Unbelievable…

If our coins actually had purchasing power, they wouldn’t be hoarded in pockets and jars the way they are now. The monetary system we use now is far too precise for our daily transactional needs. If all coins below the quarter-dollar would stop being produced and all bills below $20 terminated and replaced with $2, $5, and $10 coins, the coins would have significant purchasing power and do what they were intended to do which is circulate. People wouldn’t hoard such coins because it would be too costly to do so. Almost no one alive actually remembers when coins had… Read more »

@Vachon; Sadly, you’re right. And yet if they just took the time to sit down at the kitchen table every 2-3 months and roll all their change, they could walk into a bank and come back out with $30 – $40 dollars in cold hard cash. It amazes me that some people toss all their coins into those conversion machines in the supermarket lobby and come away with 75-80% of the face value because it’s fast and convenient. Coins DO have value, even pennies, but only if you’re willing to give them the time & effort required. Oh well, I’m… Read more »

Rolling coins is a hassle, both coming and going. If I got a pile of coins I’d go to the local casino and let them count the coins and give me bills in return – for free. But I don’t get piles of coins anymore; I as much as possible use a credit card and get at least 1% cash back on every purchase I make.

RonnieBGood quoted “A pocket full of coins from Canada won’t cause you to lose your pants.” Maybe its time more young men started wearing belts. 😉

Mr. Vitter comes into my retail store at least once a month….I can’t wait to give him his change in Presidential coins and ask about S.94!!!!

The Presidential Dollars should be continued only if those that buy the coin rolls in bulk (in order to introduce the currency to the public) once again can buy them at face value without excessive delivery costs.
I stopped collecting when I realized that I only collect 4 from the box of rolls I order, and instead of paying face value, I was sacrificing $1.11 approx to waste each time that I introduced each dollar to the public.
I would continue to collect if the government reinstated their former policy of face value cost per box as before.