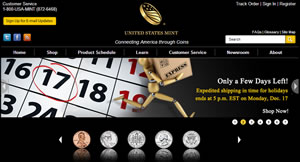 The United States Mint today made available a 12-month product schedule filled with coins and sets for release during calendar year 2013.

"Getting this schedule out now shows that we are listening to our customers and are committed to them," stated Michael White, U.S. Mint spokesman. "Hopefully, this will allow our customers to better plan their purchases for next year."

A heads up list of upcoming products has been a wish list item for many collectors who want to know what to expect so they can better target their spending choices. Prices for the products will help further in that regard, and those will be issued "very soon," according to White.

"As soon as prices are available, we will pass them along.  But again, in the short term, we felt that getting information to our customer was important," White said.

Of the published releases, one scheduled item in particular stands out as a product likely to garner attention. It is labeled the "American Eagle West Point Two-Coin Silver Set," although its final product name is yet to be determined. Its release date is toward the middle of the year. Will this include a proof and reverse proof? More news on the set is expected soon.

The current U.S. Mint 2013 Product Schedule is offered below:

This is not the first time the U.S. Mint has released a relatively complete annual schedule. As recently as January 2011, a schedule was issued that contained a majority of the releases for the year. It does differ, however, from the procedure used in 2012 in which release dates of products were offered with much less notice.

It is somewhat common for the U.S. Mint to adjust release dates on its product schedule. These changes should be noted on the Mint’s official schedule that will be available and online soon at http://www.usmint.gov/catalog.

Getting this list in advance is helpful. And knowing the prices soon is also a plus. Since silver is more volatile than gold, how’s about a silver pricing grid like the Mint has for gold? That way they won’t have to stop selling for a while during the re-pricing period

@Kevin,
Agree with the need for Silver pricing grid.

Close but no cigar. Where are the First Spouse and Presidential Dollar 2-coin sets?

Once again NO mention of the Spousal series… This years ‘Mint’ SCREW UP had ended my pursuit to get at least one of each series. The rising cost, premium and the jammed together of the issues is another FAILURE by the Mint. No mention of the final two for 2012. Plenty of JUNK that they offer…NO THANKS.

Hooray! Finally a year long schedule again. I can just picture Geithner standing over Peterson’s shoulder making him write down the schedule and Peterson sweating bullets as he is because it is so much against his personality and out of his comfort zone to communicate anything, Even if most of the dates are just months it’s far better than the dribbles we got in 2012. george – maybe not a cigar but a pretty big cigarette. I’m happy to see the year long schedule even if it’s not totally complete. Poggie – Not all the Mint’s fault and jammed together… Read more »

Interesting that the proof ASE is offered on January instead of June or July like the 2011/12 proof offerings. I wonder if they are going to try to aim above a 850,000 mintage, and offer the coin for a longer sales period as its the top selling product in their line. Everything else seems to have a similar release date as its 2012 predecessor, at there is a calendar for the upcoming year unlike for 2012.

Interesting that they are creating another 2 coin Eagle set with this one coming from West Point. It shows a 1 month ordering period like this years set. Both coins will probably be unique to the set this time. Will be interesting to see what the final mintage will be on that one. Maybe the nice thing about the set is that it has a proof eagle in it and collectors will need it to complete their sets. I could see the demand for the 2012 set increasing as a result of this set being created. You also have another… Read more »

indeed homer, very interesting… ———————- “”Of the published releases, one scheduled item in particular stands out as a product likely to garner attention. It is labeled the “American Eagle West Point Two-Coin Silver Set,” although its final product name is yet to be determined.”” ——————— timing it all for the least amt of shipping’s: i will wait to order the mint set, proof set, silver proof set, and the first two rolls of quarters along with the West Point silver eagles set, then later in the year, the kennedy half rolls and the last 3 sets of quarter rolls. but… Read more »

No mention of a Palladium American Eagle either. Huh, wonder what happened to the study that was commissioned for 2012???

No mention of a special Buffalo 2 coin set or anniversary buffalo either!!

Definitley excited for the west point two coin set.. The proof and burnished silver eagle already comes from West Point so I wonder if it will only have one coin unique to the set, a reverse proof. Hopefully they will have both coins unique to the set and they will come up with something cool.

Buffalo 10th and Eagle 30th anniversaries will be in 2016. Start saving your money, it’s going to be expensive.

The Ann sets will be expensive, Assuming Gold will hold or go higher.

For the Investor, Low Buffalo mintage levels are very attractive.

Platinum eagle 10th used 1/2 oz coins to lower the cost, might do the same in 2016 for the gold 30th. I wonder how the silver $1 would look if it were gold instead. Hmmm…
Housing in SoCal has already started recovering, Oct numbers indicate.
I like the gold buffalo best.

1/2 or 1/4 ounce coins would be a smart way for the mint to go to make Gold & Platinum anniversary and special issue sets more accessable to the average collector. I do recall the 2 coin 1/2 oz. 10th ann. plat. set released around the $2k level. Is this within reach of the average collecor? With the price of metals rising how about 1 oz Gold coins with a 40% or 60% silver mix? What about 100% copper coin for the presidential $1 proof series? Aside all this, we collect for the beauty of the coins within our personal… Read more »

Housing markets will signal recovery when the 30 year intrest rates rise above 6%. The Gov. has stated that they will not raise intrest rates unitl the unemployment rates drop below 6.5%. Gold will remain high until these tipping points are reached.

Hi George. Did you do well with the sale of your First Spouse coin?