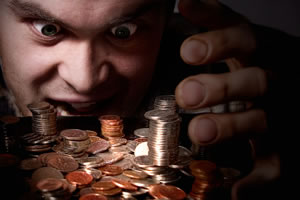 Anecdotal evidence is growing that more criminals are targeting coin collections, even if they don’t always understand their true value. Consider five cases from 2012:

While the exact number of coin-related burglaries is not always reported, there are some estimates of the seriousness of the problem. The Butternut Company, a private company that specializes in Civil War tours and coins, reports that one in three collections eventually will be stolen.

Collectors, of course, can take measures to combat theft. Many keep their coins, especially the most valuable ones, in a bank safe deposit box. That offers security but comes with a few downsides as well. For one, the collector’s access to his prized possessions is limited — he or she can only get to them during banking hours.

Likewise, basements, attics and garages aren’t good options either, because of varying temperature and humidity levels. Collectors also shouldn’t keep coins near the kitchen due to potential exposure to smoke and grease.

Keeping your coin collection safe is only part of the challenge.  Preparing for a possible loss is another important responsibility of any collector — and that involves securing proper insurance coverage. There are three basic options for insuring a coin collection. Consider the following:

Whichever type of policy a collector decides to go with, they should always make sure their collection is insured up to full value and have an appraisal performed. An inventory of the collection will help when a claim is filed. Collectors also need to revisit their coverage periodically, particularly when valuable coins are added.

The cost varies according to the collection. But with the high potential for theft, coverage should always be a consideration for a numismatic.

This article was contributed by Carrie Van Brunt-Wiley, Editor of the HomeInsurance.com Blog.

So it looks like a safe deposit box is their only suggestion for safety. I would also suggest getting a vault. In the end it would be cheaper than a safe deposit box(es) depending on the size of your collection.
I also looked into a rider on my home policy and found it prohibitively expensive since even collectable coins are considered as ordinary cash.

Not talking about your collection to “outsiders” is helpful too and reminding those who do know about it how important it is to not talk about the fact that I’m a coin collector is a big one too. I may trust you, but I cannot say the same for those whom you know. Keep it on the QT please. I know we love our collections, but we must remain mindful that we are collecting objects which are both easily spent and sold with known values. There’s no sense in letting outsiders know you have what amounts to a pile of… Read more »

Vachon – good advice and ironically I carry a fake wallet with 6 dollars (all ones)in it and fake credit cards when I travel for work – it looks real enough but no real loss. Also if you are having people in your house to do any work – nothing laying around on your coffee table or in your book shelves should indicate you collect coins. Yes I have books but those get put away when someone has to come in to my house. As far as they know from the magazines I have laying around that I have interest… Read more »

Nobody including me knows the true value of my collection. I’ll let my heirs figure that one out.

Be careful when and how you set up buys. Try to always meet in a neutral location. Be mindful of others watching from afar. Use your reaerview mirror and take a long out of the way drive back home. Try not to use your last name, but call yourself Benny the Coin Guy or something. Ambiguois business card ?
It’s important to instill a trust factor with a seller, just keep it simple, and offer decent buy prices for repeat biz and word of mouth to generate future deals.

Bank Safety Deposit Boxes are the best choice. Look around. Some are very reasonable. Be sure to pick your space above the 100 year flood level in your area! Your SDB only downfall is if it is flooded with sea or river water!

Safety deposit boxes are not always as safe as you may think. The bank that had mine closed, and even though I specifically said I wanted mine moved with others to another branch, they “accidentally” drilled into it, and someone stole $1,000 worth of silver coins. I have insurance but my brother died a week after this incident, and because I had a lot on my mind I neglicted to report the theft in time and my insurance company refused to cover the loss. Fortunately, I keep most of my stuff in my own safes…………

Use this link to see how safe your bank/ safe deposit box is:

I would suggest getting a single closet sized vault or heavy duty file cabinet, unlike small safes, the theives could easily walk away with it with some help, but with a heavy closet sized cabinet it would be most unlikley that they could carry it out by hand.

all my coins are buried in my back yard right here in Springfield.!

Next door to the Flanders’