(Fallbrook, California) — The combined total of the cash reward offered by the Professional Numismatists Guild, PNG member-dealers and others is now $159,250. The money will be given for information leading to the arrest and conviction of the thief or thieves who recently stole rare coins from long-time PNG member-dealer Julian M. Leidman of Silver Spring, Maryland. Six dealers pledged $10,000 each to help solve the crime. 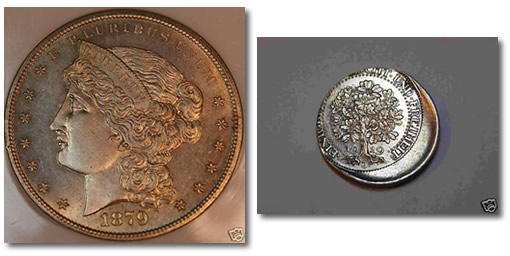 This pattern 1879 silver dollar and off-center 1929 5 Reichsmark silver coin are two from the over 1,000 coins stolen from PNG member-dealer Julian M. Leidman

The theft occurred on Sunday, October 11, 2009, as Leidman was returning from a coin show in Stamford, Connecticut. His entire inventory of over 1,000 coins as well as currency ranging from Colonial era to small size notes was stolen when his minivan was broken into during a stop in Pine Brook, New Jersey.

Two bags of clothing and Leidman’s laptop computer also were taken when the thief or thieves smashed a passenger window to remove three heavy bags of coins and paper money from his minivan.

As of Monday, October 19, 2009, these are the dealers and organizations that have made pledges to the reward fund, according to PNG Executive Director Robert Brueggeman.

"The PNG has a long history of offering rewards to help catch thieves of numismatic property. Any theft of coins or bank notes affects the entire hobby and profession in one way or another. We must be vigilant in our security to prevent theft, but we must also come together to assist in the apprehension of criminals," said Robert Brueggeman, PNG Executive Director.

Anyone with information related to the case is encouraged to contact the investigating police officer for this case, Detective Christopher M. Keezer, of the Montville, Township, New Jersey Police Department at (973) 257-4112 or by e-mail at CKeezeer@MontvilleNJ.org.

About the Professional Numismatists Guild

Founded in 1953, the Professional Numismatists Guild is a nonprofit trade association composed of the country’s top rare coin and paper money dealers who must adhere to a strict Code of Ethics in the buying and selling of numismatic merchandise.