This week’s final trading session opened with the precious metals turning lower across the boards.

Additional weak Chinese economic numbers contributed to the onset of the "risk-off" sentiment this morning. Today’s figures from Beijing showed a contraction in bank lending activity and slowing import/export activity. You can read more about the slowing patterns coming out of official Chinese data below.

According to CFTC reports, the gold market’s net long gold positioning is not too far from the nadir it experienced back in 2008. In recent sessions, COMEX gold volumes plodded along at fewer than 70,000 lots, and that participation level (or lack thereof) is approaching a low for this year. Veteran market watcher Ned Schmidt notes that while gold and silver appear to have put in some possible bottoms recently, the fact that

"both metals might have made their lows well above what would be considered major psychological or economic lows is deeply bothersome. That failure to make important and significant lows has strong negative implications for the potential highs in the coming year or so."

On Thursday the market action was about as exciting as it had been for the rest of the week (read: boring) and confined to tight ranges. Fresh platinum-group metals price projections from HSBC brought a mixed bag of restraint as regards the average value of platinum and palladium and of some optimism that relates to the supply of the two noble metals. The bank estimates platinum to average $1,525 this year, and $1,625 and $1,775 for 2013 and 2014 respectively. For palladium the equivalent projections call for $655 this year and for $750 and $800 in the upcoming two years.

That said, HSBC also noted that platinum’s 2011 surplus of 687,000 ounces is forecast to shrink to 325,000 ounces this year and to 102,000 ounces next year. Reduced mine supply will play a pivotal role in the narrowing of the surplus as numerous platinum miners are extracting the metal for substantially more than the current market price and it is thought that they might curtail production going forward.

As for palladium, the market is anticipated to shift back into a deficit paradigm of over 540,000 ounces following last year’s sizeable surplus of over 1.2 million ounces. Should Russian state-owned stockpiles be exhausted and South African production difficulties continue, the palladium market could see a deficit of over 930,000 ounces in the coming year.

"Russia’s ministry of natural resources has drafted a bill that will facilitate the access of companies with foreign capital to mine its gold, platinum group metals (PGM) and diamond reserves, according to documents published on a ministry website. Russia’s gold reserves account for about 10 percent of the global volume, second only to South Africa’s, according to ministry data. Its share in palladium accounts for 24 percent of global reserves and in diamonds 35 percent."

Well, the first batch of Chinese economic statistics that was released yesterday painted a picture of deceleration taking place across the board in that country. The weakening economy impacted industrial production as well as consumption and perhaps the only bit of positive news (for China’s denizens anyway) was the fact that inflation climbed by 1.8% — the lowest such gauge in 30 months.

The figures for China’s industrial output, retail sales, and fixed — asset investment levels all came in below analysts’ expectations and they prompted some of them to opine that the stage could be set for a fresh round of monetary easing by the PBOC. Others felt that while the numbers are not great, they are not a de facto "trigger" for central bank action just yet.

Crude oil promptly picked up $team yesterday morning as speculators began drumming the beat of central bank easing once again. One analyst was quoted to say that (and this applies to precious metals in spades as well) at this juncture "the market is in a mode where all that matters is the prospect of central bank monetary stimulus." Supply/demand fundamentals? We don’t need no stinkin’ supply/demand fundamentals!

Of course, China is not the only place where deceleration is the order of the economic day. A broad survey conducted by the ECB came up with a long list of economic forecasters who have taken the scissors to earlier projections for growth in the eurozone. In fact, consensus is now that the region’s economy will contract by 0.3% in the current year and that if it grows next year, it might only do so at a snail’s pace of 0.6% per annum.

Earlier projections had estimated 2013’s eurozone expansion to come in at as high as the 1% level. That survey quickly prompted similar expectations of monetary accommodation to come courtesy of the ECB since it incorporates expectations that inflation might only run at a tepid 1.7% next year — under the ECB’s 2% target/mandate. At any rate, the euro was not able to draw much in the way of positive vibes from perceptions that the ECB might (eventually) ease.

The common currency struggled against the greenback for most of the Thursday session. It traded in the middle of its recent range, mostly around $1.23 or so. The currency trade is more obsessed with whether the ECB will intervene to lower Spanish and Italian borrowing costs than it is with a possible quarter-point monetary ‘give’ by the central bank.

So, why did the dollar continue to attract worried monies once again yesterday? Read on. It appears that the broader picture across economies is one of trading places. Whereas the US went into the economically contractive "black hole" first, it seems that it is now also the first one to climb out of it while the rest of the world is either orbiting the same of trying to escape from its gravitational pull.

Comparatively speaking, the USA is not doing too badly, thank you. This week we learned that the US’ trade deficit dropped to its lowest level in a year-and-a-half in June ($42.9 billion) on the back of sliding crude oil prices and a more robust level of exports ($185 billion).

Economists note that a lower trade deficit implies less of a drag on economic growth as the country spends less on imported goods and reaps more revenue from the sales of domestically made ones. Some analysts have surmised that the trade deficit contraction could mean that the US actually grew at a better pace in QII than first estimated by the government (1.5%).

Next in line was the revelation that US productivity bounced back in QII to 1.6% and that the figure compares extremely well to the 0.5% decline that was noted in QI of this year. Of course, there is a school of economic thought that believes that such slowdowns in productivity are generally a precursor to a surge in hiring as firms keep adding workers to meet the pace of demand for products and/or services. As far as the labor front goes, we also learned on Thursday that initial claims for jobless benefits unexpectedly fell by 6.000 applications in the latest reporting week.

The number of claims came in at 361,000 for the week ending August 4th and some see signs of a stabilizing job market in such readings. To be sure, at least one factor that can skew week-to-week readings in the labor market- seasonal auto worker layoffs-is about to come to an end in the coming week. Thus, with jobless claims stabilizing and with modest increases in month-to-month job growth, the landscape in the US labor market is beginning to look brighter than the stubborn general unemployment level at above 8% suggests. July jobs in the non-farm sector grew by 163,000 positions in July as we reported last Friday.

Here is the US Labor Department’s own graphical representation of jobless claims going back to the beginning of 2009. We think you get… the picture (of declines and stabilization): 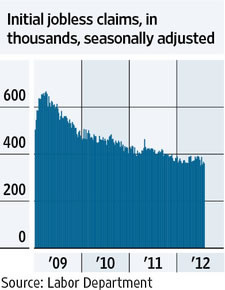 CoinNews.net - May 23, 2022 0
Gold gained for a third straight session on Monday and finished near a two-week high. Silver, platinum and palladium also gained on the day...