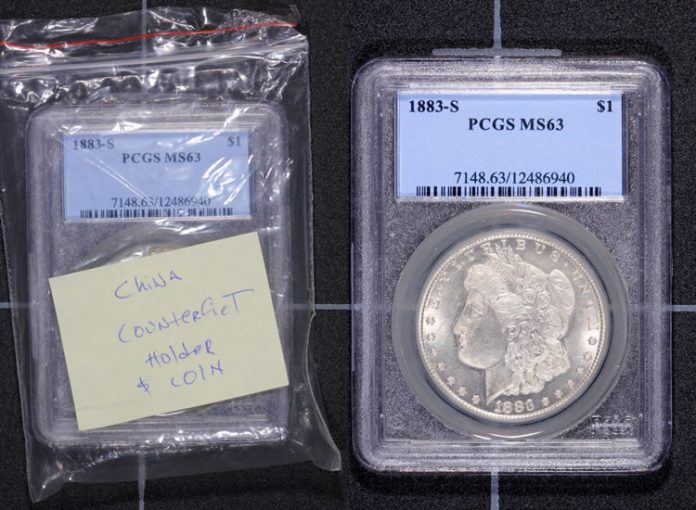 PCGS has detected over 5,500 counterfeit coins submitted in the last 12 months, a higher number by far than in any previous 12-month period.

"The Congressmen and staff members were impressed with what they heard and saw as we explained the frightening detail counterfeiters have been able to achieve and the need to bring anti-counterfeiting laws up to date to combat the problems," said PCGS attorney Armen Vartian who made a presentation with other PCGS delegates at the meetings.

Vartian met with Rep. Fred Upton (R-Michigan), Chairman of the U.S. House Energy and Commerce Committee, Lloyd Doggett (D-Texas), a member of the House Ways and Means Committee and staff members for other Congressmen including Howard Berman (D-California), the second ranking Democrat on the House Judiciary Committee.

"It was a very successful series of meetings. The Congressmen and staff members focused on the items we brought; actual counterfeit coins and counterfeit holders, and heard about the on-going efforts by PCGS to combat dealers who sell fake coins and holders. We also talked about educating collectors and dealers. But now the numismatic community must come together and urge other members of Congress to support and approve changes to the law."

Those proposed changes are in HR5977, the Collectible Coin Protection Act of 2012, a bill that would amend and significantly strengthen the Hobby Protection Act of 1973. The Washington meetings were aimed at educating members of Congress about the counterfeiting problems and the need for stronger laws.

"Every collector, every dealer, should personally contact their Congressional representatives now and specifically request they support HR5977," Vartian emphasized.

"There are several very positive elements in the bill (HR5977) for PCGS and for all collectors and dealers who buy and sell PCGS-certified coins. One provision provides for triple damages for counterfeiting third-party holders such as the patented, sonically-sealed PCGS tamper-evident holders," said Don Willis, PCGS President.

HR5977 was introduced on June 20 by Congressman Lamar Smith (R-Texas), Chairman of the U.S. House Judiciary Committee, and co-sponsored by Congressman Upton.

The Hobby Protection Act, first enacted in 1973 and amended in 1988, requires manufacturers and importers of imitation numismatic items to mark them plainly and permanently with the word, "COPY." The Collectible Coin Protection Act would expand and strengthen the consumer protections to provide remedies against sellers of such items and others who substantially assist them. It also would increase penalties for fake coins fraudulently sold inside counterfeit grading service holders.

Barry Stuppler, Chairman of the Gold & Silver PAC, said if approved by Congress and signed into law by the President the new law would:

In a statement prior to the meetings, Willis stated:

"Chinese counterfeiting is the most serious challenge faced not only by the collectibles markets and brand name products, but also by the United States Treasury. Entire industries have sprung up in China to manufacture virtually anything made in America including U.S. Government issued coins. These factories and industries operate in the open and with the full support of the Chinese government. By its lack of action to stop the activities, the Chinese government endorses the counterfeiting of U.S. coins."

"Even worse, Customs and the U.S. Government do little to stop counterfeits from entering the U.S. Once in the US little effort is made to arrest and prosecute individuals selling counterfeit material. Consequently the U.S. has been flooded with counterfeit products, including coins, resulting in the loss of billions of dollars in revenue each year," Willis explained.

Since its founding in 1986, PCGS experts have authenticated, graded and certified more than 23 million coins from around the world with a declared value of over $26 billion. For additional information, visit www.PCGS.com or call PCGS Customer Service at (800) 447-8848.

It’s great that something may be done to help the collector. I’m not sure that just a new law will do much to curb the problem, Only the bar code on the counterfeit holder appears different. It seems that it will take the work of Customs and large auction houses to slow it. The major TPG companies should provide a list of coins and dates they most often see counterfeited. As a member of such a company, I would appreciate such a service. Collectors will also have to be part of stopping the problem. There are many coins on the… Read more »

While it’s great to work to stop Chinese counterfeits , I hope Congress can tell the difference of recently manufactured fakes that are made to fool modern collectors and contemporary fakes made to fool merchants in the past the latter of which are of interest to some numismatists .

It seems the Chinese have bought old coin presses that are the same type used to make our coins , this added with the laser etching of dies has made for a product that is almost identical to the real US minted coins . If this keeps up education of die marriages which used to be enough to tell if a coin was fake will not work for everyone anymore , and there may be great harm to the coin industry not only in the US but the world . It’s time for congress to work to end these counterfeits… Read more »