Bullion Articles and Precious Metal Reports In The Lead – There’s Gold (and Platinum Galore) in Them Thar…Stars!

If it’s Wednesday, it must be…Fedsday. The markets opened flatter than a griddle cake this morning as everyone opted to remain in suspended animation ahead of the non-event that the Fed’s statement will likely turn out to be in the opinion of many. Spot gold treaded water at the $1,640 mark while spot silver tried to cling to the $31 level per ounce.

Gold’s last/best chance to try for the $1,650 target ahead of the Fed today comes from a lower-than-expected US durable goods orders figure and the flicker of a QE3 hope that such a metric might give rise to among speculators. The only decent advance was noted in platinum, which added $13 to rise to the $1,554 bid level. While the gain cannot be attributed to today’s lead story, the noble metal (along with palladium) has come quite close to the level which many believe to be make-or-break, production-costs-wise. Palladium climbed $4 to $667 the ounce.

In the background, thus US dollar also drifted in anticipation of the FOMC utterance while crude oil added 80 cents to rise to the $104.38 per barrel mark. Copper was a stand-out gainer this morning; it advanced by 1.23%. Meanwhile, the Street was getting ready to celebrate Apple’s stunning results (earnings up 93% on the quarter just passed) with not only a 10% boost to that firm’s share price but with a plethora of …apple-polishing articles by various market pundits. This has become a Red Delicious market, Siri.

Reuters reported that trading volume on Tuesday was below average for a third consecutive day, as some gold investors reduced their bullish positions ahead of the outcome of the two-day Fed Open Market Committee meeting today. A brighter U.S. economic outlook and fading U.S. easing hopes have weighed heavily on gold speculators’ and retail investors’ minds recently.

However, "price volatility could still spike ahead of today’s May COMEX options expiry, as both call and put options investors look to profit from their heavy bets at the $1,650 strike price. There are currently around 10,000 lots in calls and around 30,000 contracts in puts at the popular price, traders said."

Over in India, the second most auspicious Hindu calendar date on which to buy gold this year came and went without the expected surge in physical demand that one might normally have anticipated (not that one ought to seek a gold market redemption in one exclusive niche).

Andrey Kryuchenkov, a London-based market analyst at VTB Capital, notes that "India’s jewelry demand or physical interest from the world’s top buyer is very slack in spite of the Akshaya Tritiya festival [this week], which is a concern. Investor interest is limited."

And, don’t look now, but there is a shift in the way Indians are buying gold; one that hard-core gold bugs will disapprove of.

Reuters India reports that "trading in gold ETFs jumped on Tuesday, because people have started presenting the paper instruments as gifts rather than the metal itself."

Mr. Kryuchenkov’s assertions about low physical sales were corroborated by a local source:

"Sales are nil… there are no customers at shops. Otherwise sales for Akshaya Tritiya used to start two days in advance," said Harshad Ajmera, proprietor of JJ Gold House, a wholesaler in Kolkata.

The physical silver market is suffering from a somewhat similar problem; lack of investor interest and perhaps more worryingly, an increase in liquidations by same. The amount of white metal held by ETFs that specialize in it fell by the most in more than four years on Monday just as silver prices scraped floors not seen since late January. Silver ETF demand had already experienced at 4.5% drop-off in the past year. The level of global demand for silver declined for the first time in four years, owing to lackluster conditions in key application niches such as solar panels and, of course, photography.

However, as is the case with most commodities, we must also factor in China when trying to dissect the headwinds that silver is currently facing. The analytical team over at Standard Bank (SA) has found that China’s published silver import and export numbers March showed net silver imports of 179 tonnes. The figure was up marginally from 171 tonnes that the country imported in February, and much higher than the 27 tonnes it took in last year in December.

However, the team notes that "while higher Chinese silver imports may appear bullish, we believe that the imports will only add to domestic stockpiles for as long as fabrication demand in China remains lacklustre. And we believe that yesterday’s Flash PMI manufacturing data for China is an indication that fabrication demand indeed remains lacklustre. Therefore, rising stockpiles in China may cap rallies in silver until industrial demand regains full strength."

Normally, if silver stockpiles were actually low in China, then the rising level of net imports would have been a bullish development. But the Standard Bank analysts believe that warehouse stockpiles in that country are quite high, comparatively speaking. They estimate that since 2009, China has probably amassed silver stockpiles that amount to around 15 months’ worth of fabrication demand, up from only 4 months’ worth at the beginning of 2009.

On a seasonal basis, China should now import less silver in the period of from April to July, before intake [hopefully] picks up again in August. This development (along with some of the other ones mentioned above) may put downward pressure on the price for the next few months and then possibly add some support the closer we get to the end of this year.

In the meantime, Traders Huddle (among other things) remarks that "Looking at SLV’s chart, there’s really nothing in the way of material support to prevent the ETF from falling to $25-$26 in the medium-term."

For several years now, amid a rip-roaring bull market in precious metals, and while enjoying profit margins that only Daddy Warbucks could ever have, many a mining company CEO has been heard crying "peak…x (insert your favorite metal here)!" Of course, the peaks those gentlemen alluded to did not materialize, despite such scare-mongering.

However, now, if there are indeed any apprehensions at all about just how much (make that; how little) gold, or platinum, or, whatever, may be left in the Earth’s crust, well, we might begin to let go of them, little by little. That is, provided Messrs. Page, Schmidt, Anderson, and Perot have their way inside of the next decade, or less.

Quick question: what is this? 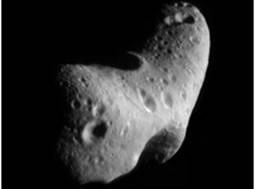 Answer: No, it is not a discarded Mr. Potato Head, or a banana GMO experiment gone terribly wrong.

The above, is an asteroid (image courtesy of NASA). Now imagine this celestial object being composed entirely of…platinum, for example. We are talking about 33x13x13 kilometres of pure platinum. Do the math. All of the Earth’s platinum deposits actually came from such objects when they had a head-on with our planet eons ago. Now consider the fact that it would only take a platinum asteroid a mere 500 metres in diameter to suddenly place more platinum at humankind’s disposal than has ever (!) been mined on Earth. We think you get the picture, hopefully.

Well, so do the aforementioned gentlemen. The Google VIPs, billionaire Ross Perot, and other serious (and seriously rich) folks are going ahead with plans to mine the riches of space. Take note of the name of an as yet little-known firm; Planetary Resources Inc. It has big plans and its endeavors could be worth in the trillions. What such new sources of supply would eventually do to the price of the metals in question is a topic best left to ponder on another day.

PR co-founder Eric Anderson says that "Ripping up the Earth’s crust not only is terribly intrusive from an environmental point of view, but it’s actually really expensive and really hard," Anderson said. "Why not go to the source? There is ample technology to go to asteroids and begin to use resources that convert them into their constituent elements."

Think this is just sci-fi? Think again. Just a few years ago folks howled when they heard of the mere idea of mining metals from the ocean floor. Now, respectable firms such as Nautilus or Neptune are turning those ideas into reality. While some bloggers have been quick to dismiss PR’s outer-space mining visions as mere hallucinations, this Scientific American entry gives it a thumbs-up.

Something else that is apparently undergoing a transformation from idea to reality is the gain in momentum of the US economic recovery. For all the flak that the Fed has caught, its policy approach appears to have yielded some fruit on important fronts such as unemployment and inflation (its dual mandates). We shall see later this afternoon just how optimistic a Fed we are dealing with but if the FOMC statement contains any upgrades on the prospects for the US economy the US dollar stands to possibly break higher. At any rate, it is being said that six policy makers in January forecast a Fed rate increase before 2014, and now others may join their ranks today on signs that the US economy is .improving.

The aforementioned idea-turning-into-reality is best judged by certain kernels of import that are normally all but lost in the noise usually being made about Friday jobs data releases and such. We are not talking about the little "bricks" that, when placed together, generally constitute the foundation of an enduring recovery; hours worked, consumer sentiment, business confidence, credit conditions, general business investment, etc. While they all certainly help, the recent shift in drivers for the recovery has been pointing to two agents that show great promise; auto sales and homebuilding activity. Of the 3 percentage points that the US’ GDP grew by in Q4 of 2011, fully 1.7% was contributed by these two types of spending.

Aside from all that, the punditry surrounding what the Fed will say/do/not say/not do remains as speculative in nature as it has always been. The current "flavor" of such guessing reads as follows:

"The Fed will likely repeat its plan to keep short-term interest rates at record lows through 2014. It may also signal that it won’t likely launch any new program to lower longer-term rates unless the economy weakens. That would be a switch from three months ago, when Bernanke and his colleagues ended their January meeting with hints that they were edging closer to a third round of bond buying. The Fed’s bond purchases have been intended to drive down long-term rates to encourage borrowing and spending."

There was not much to speculate about what the Bank of Canada might soon do, however. Governor Mr. Carney used a Parliamentary appearance last night to once again say that the Bank might have to tighten policy. This probability had already gained traction in the wake of the statement issued after the most recent Bank of Canada meeting. Mr. Carney cautioned that Canada’s households have been loading up on too much debt related to the equity present in their homes. There are legitimate fears that a Canadian iteration of other (since burst) housing bubbles are in the making up here.