The carnage in certain commodities continued on Tuesday and some of the price-damaging selling sprees extended into this morning as well. After having dipped some 5% from recovery levels and after having touched values under the $1,600 mark for the second time in a week, gold prices fell about 1% in early morning dealings on Wednesday.

A slightly lower dollar and a 3% recovery in crude oil (factors whose respective strength and decline had been cited as having contributed to gold’s Tuesday slide) did not manage to lend any assistance to the yellow metal this time around.

Aggressive fund liquidations kept the pressure on and the precious metals all opened solidly lower for the midweek session. None of that means, however, that counterintuitive moves will not develop throughout the day; we saw just those kinds of gyrations in the Dow on Tuesday for example.

Modest but encouraging numbers related to job creation were released by ADP this morning. The US economy added 91.000 positions in September. Small businesses led the way by adding 60.000 jobs while medium-sized firms contributed 36.000 positions. Large business (hello, Mr. Romney?) shed 5.000 jobs. What is notable in the ADP report is that not only were two-thirds of the jobs added being created by small business but that this sector expanded job-creation for the 22nd consecutive month. And, by small, we mean ‘small’ — firms with 1 to 49 employees. Some say, this is the economic backbone to keep watching.

Spot gold lost $14.00 on the open and was quoted at near $1,610.00 per ounce on the bid-side. It might perhaps be too early to call this kind of action in gold ‘consolidation’ rather than a resumption of the downtrend; not when bearish formations are popping up on charts again. Long-term charts reveal that, according to Thomson Reuters technical analyst Wang Tao, gold’s 12-year bull-run may have drawn to a close with the recent declines in price. Graphically speaking, the statement looks like this: 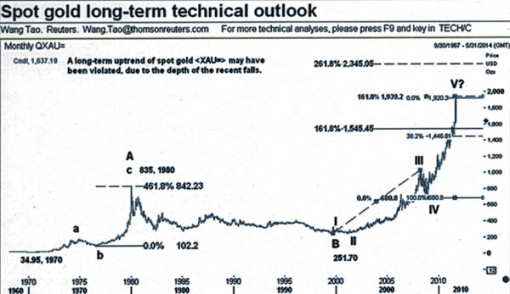 Not all is "lost" in the commodity space, according to Natixis Commodity Markets. The commodity-broking firm chimed in this morning with a relatively bullish take on the prospects for "stuff’ in 2012. We say "relatively" because — in the case of copper-the forecast was 7% lower than previously issued even though the projected price of $9.85K per tonne is above this week’s $6.8K per tonne.

For gold, however, Natixis restated its conviction that the price was in a bubble and that the value of the yellow metal would drop in coming years. (Yes, "Natixis Nixes Bullion" would have been too much for today’s title..) Natixis feels that gold will average $1,450/oz in 2012.

According to Mining Weekly, "the firm however "maintained its long-term bullish outlook for other precious metals like platinum and palladium, which are largely industrial commodities used in the automotive sector to cut exhaust emissions. "Automobile ownership rates among the growing middle classes in the developing world will inevitably push significantly higher in coming years," it commented."

Former trading floor "combatant" and now lecturer at University of Boston’s School of Management, Mark Williams goes one step further and is calling for gold to possibly fall as much as 60% (not a misprint) and conceivably touch $700 in an unwinding of recent investment patterns.

Mr. Williams notes that "the usual supports for gold are no longer working: ‘Global stock markets are volatile, central banks have not regained credibility, inflation is still a concern, and trust in the markets has not been restored. Yet gold continues to fall…" Mr. Williams remarks that ‘Gold bugs attribute these drops to profit taking, increased margin requirements, and a bull that is taking a short breather."

"But what if they are the early signs of a fundamental market shift?" he then questions. Well, at this juncture, there are very few who are ready/willing/able to take into account such a battleship turn. This is, perhaps, as it should be, given recent market performance and mass investment psychology. For a humor-tinged take on the psychology of the gold market you might visit this little dissertation. However, all humor aside, let’s also briefly revisit the prescient words of one Warren Buffet who, in a letter to Berkshire Hathaway shareholders (written in the year 2000!), wrote:

"The line separating investment and speculation, which is never bright and clear, becomes blurred still further when most market participants have recently enjoyed triumphs. Nothing sedates rationality like large doses of effortless money. After a heady experience of that kind, normally sensible people drift into behavior akin to that of Cinderella at the ball. They know that overstaying the festivities — that is, continuing to speculate in companies that have gigantic valuations relative to the cash they are likely to generate in the future — will eventually bring on pumpkins and mice. But they nevertheless hate to miss a single minute of what is one helluva party. Therefore, the giddy participants all plan to leave just seconds before midnight. There’s a problem, though: They are dancing in a room in which the clocks have no hands."