Bonhams (www.bonhams.com) is pleased to announce a stellar result for its September 4, 2011 auction of rare coins and medals. The sale brought more than $1.4 million over the Labor Day weekend. 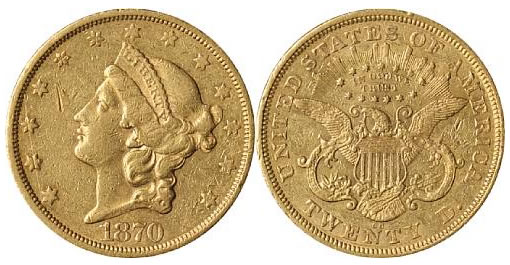 Highlighting the holiday auction were gold coins from the Estate of Hellen and Charles Mapes, of Reno, NV. The eponymous Collection, once owned by the famed hotel and casino mogul Charles Mapes, included a rarely seen, high grade 1870-CC Liberty Double Eagle gold coin. This date and mint are well known to numismatists as the top Carson City rarity in the Liberty Double Eagle series. In fact, it is the rarest of all CC gold coinage.

"We are delighted with the result of the auction. Rare US gold coins continued to bring exceptional prices. As well, the exceedingly rare gold medals at the end of the sale elicited excited eager bidders," Paul Song, Director of the Rare Coins and Bank Notes Department, Bonhams, said of the sale.

"The 1870-CC $20 Mapes coin was a truly a pleasant surprise as it realized almost 50% over its low estimate, and the Panama-Pacific Set brought nearly 30% over pre-sale expectations. Both lots prove that extreme rarity, coupled with aesthetic merit and historical significance will always be sought after in the marketplace."

The 1870-CC Double Eagle gold coin has been in the Mapes Collection since it was purchased in February of 1961 from the fabled Kreisberg-Schulman Auction of February 16-18, 1961 held at the Waldorf-Astoria Hotel in New York City, and can be considered a "discovery" piece due to the length of time since its last offering. Knowledgeable researchers estimate that approximately 35 to 45 1870-CC $20 coins exist, most in the Very Fine to Extremely Fine grade range. It should be noted there are no Uncirculated (Mint State) examples presently known to either of the major grading services.

At the time this coin was brought into Bonhams’ offices, the client was unaware that this was in fact a classic rarity, and believed this coin to be the much more common 1870 $20, which is typically estimated between $1,500-2,000. The highly sought after coin sold for $243,500 after several rounds of competitive bidding on the telephone, in the saleroom and online.

In addition, a highly sought after five-piece Panama Pacific coin set was also prominently featured during the September auction.

Created to commemorate the opening of the Panama Canal and the workmen that created it, the coins graced the 1915 exposition in San Francisco in celebration of the monumental event.

As can be seen, the coins struck for this exposition, such as this attractive quarter eagle, incorporate many of these innovations. Instead of a more traditional design, the artist of the 1915-S $2.5 proposed an unusual motif of Columbia seated on a mythological hippocampus, half-horse, half-sea serpent. The eagle, too, was styled in a new way, not seen before on an American production coin. It was modeled upon a similar eagle seen on one of the rare pattern issues. The coins were offered with the original case of issue inscribed PANAMA-PACIFIC INTERNATIONAL EXPOSITION COMMEMORATIVE COINS 1915 SAN FRANCISCO, U.S.A. and brought $142,875.

Of note within the medal section of the fall sale was the Gold Roosevelt Memorial Association Medal of Honor presented to Owen Wister for distinguished service. This rare medal has been in the possession of Owen Wister’s family since it was issued to him in 1929 by James Garfield, President of the Roosevelt Association. Garfield was the son of the late James A. Garfield and served as the Secretary of the Interior during the Roosevelt administration. To date, only 135 Theodore Distinguished Service Medals have been awarded. This medal is an extremely rare offering at public auction and sold for $21,645.

Other awards and accolades featured within the sale included the gold trophy from the first Pulitzer Air Race, awarded to Lieutenant Corliss C. Moseley in 1920, which sold for $16,965. The obverse with relief design shows the Pulitzer Trophy itself, which was crafted by sculptor Mario Josef Korbel, and the words "Pulitzer Trophy." The reverse has a laurel-crowned propeller and inscription "Winner of First Place: Lt. C.C. Moseley, USA. Distance 116.0808. Time 44:29:57. November 25, 1920." Struck in gold by the Gorham Company of New York, the trophy is marked 14 karat, measures 124 x 75 mm, and weighs approximately 375 grams. The Pulitzer Air Race occurred annually until 1925, and the large silver trophy itself now resides in the Smithsonian National Air and Space Museum.

About the Mapes Hotel and Casino

The Mapes Hotel and Casino was the first major high-rise hotel built in this country after World War II. When the twelve-story Mapes Hotel opened in the heart of Reno, NV., in December of 1947, it was the tallest building in the state. The hotel was significant in the development of the tourism industry and was the forerunner of the Nevada casino-hotels built specifically to offer gaming, guest accommodations, restaurants, bars and big name entertainment. When World War II ended, Charles Mapes, Jr., and his family decided to build their dream hotel using the blueprints chosen by his father, Charles, Sr., who had passed away in 1937.

The Mapes Hotel and Casino thrived throughout the 1950s, 1960s and 1970s, but began to face competition in the 1980s. The Casino closed on December 17, 1982. The building was allowed to decay, and finally, the Reno Redevelopment Agency took possession of the building in 1996. Despite being listed on the National Register of Historic Places, it was condemned and the building was demolished on January 30, 2000.

Bonhams, founded in 1793, is one of the world’s oldest and largest auctioneers of fine art and antiques. The present company was formed by the merger in November 2001 of Bonhams & Brooks and Phillips Son and Neale UK. In August 2002, the company acquired Butterfields, the principal firm of auctioneers on the West Coast of America.

Today, Bonhams offers more sales than any of its rivals, through two major salerooms in London: New Bond Street, and Knightsbridge, and a further seven throughout the UK. Sales are also held in San Francisco, Los Angeles, New York and Boston in the USA; and Switzerland, France, Monaco, Australia, Hong Kong and Dubai.

Bonhams has a worldwide network of offices and regional representatives in 25 countries offering sales advice and valuation services in 50 specialist areas. For a full listing of upcoming sales, plus details of Bonhams specialist departments, go to www.bonhams.com.