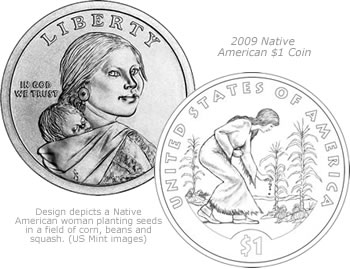 Newly designed Native American $1 Coins will be available for face value on January 2 by way of the Direct Ship Program, the United States Mint said in a release Tuesday.

"By ordering through our Direct Ship Program, businesses and consumers have the convenience and flexibility of purchasing manageable quantities of circulating $1 coins at face value," said United States Mint Director Ed Moy.

The Mint unveiled images of the new 2009 $1 coin in late November. It bears the traditional Sacagawea portrait on the obverse, but sports a new reverse thanks to the Native American $1 Coin Act that mandates a different design each year as well as an equal mintage with the four yearly Presidential $1 coins.

Exactly like Presidential Dollars too, the United States Mint will deliver circulating Native American $1 Coins in quantities of $250 or $500 within boxes of 25-coin rolls through the Direct Ship Program. The buyer pays for the face value of the coins while the Mint pays for the standard domestic shipping and handling costs.

The Mint’s program bypasses the normal distribution method for circulating coins. It enables anyone to readily get dollar coins, which can be difficult otherwise. It also helps in promoting their everyday use — something that has been troublesome, to say the least, for modern coins competing with paper bills.

The Mint said the direct ship coins will not be separated by mint mark, and that customers may purchase a maximum of two boxes, for a total of 500 Native American $1 Coins.