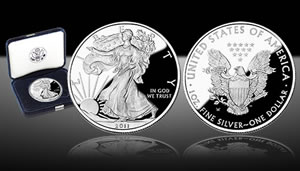 The latest round of US Mint sales figures highlights several product milestones and the debut performance of the Grant Presidential $1 Coin & Medal Set.

The popular Proof Silver Eagle achieved the milestone much quicker, having only been released on June 30. The collector .999 fine silver coin advanced 40,368 during its first full week of availability. It now sits with US Mint sales of 407,991. At $59.95 a pop, the Proof Silver Eagle dollar total is a smidgen under $24.5 million.

Uncirculated 2011 Mint Sets snuck over the milestone with weekly US Mint sales of 2,421. That lifted its total to 401,772. The 28-coin uncirculated Mint Set was released on February 8 and is priced at $31.95. Its weekly sales have been in the "modest" range of several thousand for some time, much like the 2010 Mint Sets have been around several hundred. That set launched last July and is also available for the same $31.95 price. Its latest 239 increase brought the set’s current sales to 574,277.

Bullion coins have been sprinting in the last seven days. The 24-karat Gold Buffalo coin matched its previous pick-up of 2,000. All other bullion products that sold effortlessly surpassed their previous weekly gains, as shown in the following US Mint sales tables:

*The as of date for US Mint sales of bullion coins is Wednesday, July 13, 2011 — except for the America the Beautiful 5-ounce Silver Bullion Coins which is Monday, July 11. For reference, 53,000 of the 2010-dated 1 oz Gold Eagles remained for sale earlier this year and are included in the overall totals. The bullion sales figures also include 469,500 of the 2010-dated Silver Eagle coins sold in January.