Gold prices opened at the $1,587.00 mark in New York this morning, gunning for a ninth consecutive session of gains on the back of the global debt maelstrom that appears to be sweeping up everything and everyone on its destructive path.

The yellow metal touched a high of $1,595.60 overnight and it did so despite a mild recovery in the US dollar on the trade-weighted index. Gold is now bumping up against a long-term resistance line that is formed by the interconnected previous peaks of 1999 and 2008. Albeit such a line crosses very near the $1,600 mark, the potential for an overshoot ($1,615 – $1,630) remains viable.

The rising price tide in gold has naturally elicited calls for "more to come" and it is once again lifting the spirits (and courage) of small retail investors who are beginning to believe that the boat is leaving the harbor. Diagnoses such as "the upside is wide open" being applied despite vanishing, price-resisting physical demand in key markets (India, Vietnam, China) do not appear to have anyone concerned about the market’s tenor. Buried deeper than the US’ deep storage gold is a take on the market that has it trading under $1,320 in the second half of this year. Classification: heresy.

Gold’s opening gain of $4.40 soon expanded into a $10 rise on the day as momentum buyers flexed their muscles once again in the thin summertime environment. That surge in buying turned to profit-taking fairly soon however, and gold was off by $2 at $1,581 by the time the 11 o’clock hour rolled around in New York. The fireworks continue. They do pale however in comparison to the ones that followed yesterday’s verbal fencing between Rep. Ron Paul and Ben Bernanke. The latter flat-out declared to the Honorable Rep. that "Gold is not money." Classification: heresy, even though it is a technically accurate statement.

Silver added 68 cents on the open; its bid-side quote was $38.91 per ounce. The white metal is tracing a line that has the potential to carry it towards $39.77 and then towards $43.86 possibly, but the current non-confirmation vis-à-vis gold — one where silver is far from its own former (or let alone) new high presents certain as yet unanswered technical questions.

Platinum and palladium advanced once again as well this morning with the former opening at $1,767.00 per ounce and the latter showing a bid-side quote of $781.00 following a $7 rise out of the starting gate in New York. In the background crude oil climbed 70 cents higher to touch $98.74 while the greenback was ahead by 0.19 at 74.88 on the trade-weighted index. The euro was hovering near $1.42 while the Japanese yen was trading at 79.00 against the dollar amid some rising perceptions that possible intervention to curb its rise once again might materialize.

Well, almost anyone, that is. Economist Dennis Gartman yesterday halved his model portfolio’s gold exposure due to his perception that the trade once again resembles a Tokyo subway car at 5:00 PM on a weekday. Veteran analyst Ned Schmidt reminded his readers of the old, very old adage that such "panic buying" as was on display Tuesday and Wednesday "by the lemmings of the Street never happens at a bottom."

Panic buying or not, crises or not, the reality of gold investment demand for the quarter that has just passed is quite a different one from the same period in 2010. Very little (zero) in the way of explanations is being offered as to why, if the current crisis is supposedly orders of magnitude higher than it was in 2010, the investment demand for bullion, as reflected in gold-oriented ETFs, amounted to only 45.6 metric tonnes in Q2 of this year, versus the 291.3 tonnes absorbed by the same niche last year.

By the way, and quite unsurprisingly, the bulk of the 45 tonnes (29.2 of them) went into European gold ETFs as that was the part of the world caught up in the debt storm. Also no mention is being made of the fact that record gold prices might well put a sizeable damper on investment demand from the very country that is supposed to offer the ultimate catalyst for mega-high prices. This,… because of high prices.

Bullion investments will not maintain their high growth rate as in 2010 because the gold price hit a record high and investors will try to avoid risks to slow the investment pace," Mr. Song Quanli, a senior officer with the China National Gold Group Corp. said overnight.

The series of warnings about the after-effects of a failure to raise the US debt ceiling continued on Wednesday with the issuance of the one by Moody’s. Whereas the warnings of folks like Mr. Geithner, Ms. Lagarde, Mr. Bernanke, the IMF, etc., (the list is long) have thus far failed to land on attentive ears, the Moody’s ratings alarm bell did manage to strike… certain market and public voice chords yesterday as well as this morning. At stake is the Aaa rating the USA has enjoyed since 1917.

What the Washington-based debt talks boil down to, in the opinion of Bloomberg View columnist Ezra Klein, is the fact that "Republicans and Democrats are polar opposites, at least right now. Republicans are dead set against any deal that includes compromise with Democrats, no matter its effect on the deficit. Obama is interested in almost any deal that proves he can compromise with the Republicans, in large part because it will cut the deficit. And so the negotiations come down to this: The Republicans are willing to resist the most seductive policy details in order to avoid a deal, while the president is willing to extend those enticements precisely because he wants one so badly."

At any rate, President Obama has now declared that at least as far as he is concerned, he has reached the limits of his patience on the issue. "This may bring my presidency down, but I won’t yield on this. Enough is enough." He urged congressional leaders on both sides of the isle to find common budget negotiation ground by the end of this week. Two weeks to go ahead of "D" day. Meanwhile, we have to contend with Moody’s mood; one that is decidedly… souring on US debt. Both parties were quick to cite the Moody’s warning and use it to their advantage in propagating further ultimatums on the other side.

On the other hand, some folks have a bit of a… different idea on all of this rating agency hoopla. Mind you, it is a tad ironic that the ratings firms have thrown their warnings/downgrades/opinions into hyper-drive all of a sudden. One hardly recalls them being as "active" or as vocal circa three or more years ago. Also, curiously, the firms are hardly being heard making too much noise about China’s own possibly imminent credit implosions. Since we do not have the space or the time to cover the emergent mushroom cloud of Chinese loan/debt problems here and today, we invite you to parse this riveting piece on the subject on Bloomberg.

At any rate, their sudden visibility and level of activity has drawn the attention of certain folks and is pushing the equation towards a possible war of the governments versus the ratings agencies. Others already see the agencies themselves as party to the current problem that is spreading around Europe for example:

A spokeswoman for the EU said this morning that it is "difficult to understand" the latest credit rating downgrade of Greece by Fitch’s Ratings agency, especially in the wake of the EU and the IMF releasing the latest batch of financial support to that country. Continuing on that theme, European Central Bank Governing Council member Ewald Nowotny said on Tuesday that: "credit rating agencies have worsened the crisis in the euro zone and financial markets could live without them."

According to Reuters, Mr. Nowotny, who also heads Austria’s central bank, told Austrian television ORF that he (or anyone else) did not need to go to a rating agency to assess the economic situation in Greece: "It is all apparent from public statistics and whether these statistics are accurate or not, the rating agencies … do not give any more intrinsic knowledge, they simply give opinion. And these opinions, they continue to give them in such a way that it worsens the crisis."

Evidently, the debt problems being identified by the aforementioned ratings agencies have a limited set of solutions that might eradicate them. Austerity programs are at the top of those lists. However, as we cautioned previously, such belt-tightening will not be accepted everywhere. We already know that some 40% (and probably a lot more) of Americans do not want taxes to rise, or entitlement programs to be trimmed. Someone has not yet told them that it does not work both ways. 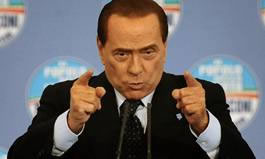 As for Italians, whose Prime Minister is seen here describing the "new size of Italian spaghetti in a future era of austerity," they are far less than willing to pull that belt in, even a bit. La Dolce Vita must stay Dolce. It is well-worth reading this essay on the topic of Italian debt and proposed austerity plans, written by Nichi Vendola, the Governor of the Apulia Region and leader of the Left, Ecology, Liberty party (now there’s a mouthful). Stop me if you have we heard this kind of conclusion before:

"It does us little good to please the out-of-touch elites of our capitals while the people have to tighten their belts and our youth are robbed of their future."